Hector has got a beautiful, full set of adult teeth now and he’s determined to enjoy them.

He’s always liked a bit of a chew, but there’s no stopping him now. Over the past few weeks as his adult teeth have really established themselves, he's seemed to get cravings for particular textures. The antlers were a firm favourite but they've fallen out of favour for now. Next thing you know he's chomping into wood, then plush toys, and then only rubber will do before he gets a sudden urge to chew plastic.

Rope toys may be advertised as good for dental health, but at the moment Hector and Stanley see these only as tug toys. That means they last a lot longer than they would if any of the dogs was in the mood to nibble at them, but it leaves a recently-teethed young dog looking for something else.

Our firewood basket attracts Hector with its selection of dried sticks. This has had the same appeal for every dog who’s lived here, so I’ve invested in a root for safer wood-based chewing.

The nylon marrow bone is also doing a great job at the moment. All the dogs love these as they have a jerky flavoured filling, and for Hector the nylon is tough enough to satisfy his craving for hard plastic.

Another favourite is the Busy Buddy Waggle bone, which is great for when Hector wants something a bit more yielding. That's OK as long as I keep checking it for wear and tear - it seems incredibly hardwaering and he hasn't broken anything off of it, but as he illustrated the other night when he threw up some bits of tennis ball, he's not averse to eating anything that falls off a toy.

But really, anything is fair game to Hector at the moment - a book left lying around is a brilliant toy that makes great ripping noises as well as providing lovely chewy cardboard. And while no shoes have been destroyed, a few have found their way out to the garden.

Hector's need to chew is literally keeping us on our toes, but he hasn't done much damage so far. My role in all this is to remove temptation (such as access to firewood and shoes) as much as possible and provide a steady supply of satisfying, safe and approved chew toys, as well as making sure Hector gets enough play and interaction so he doesn't end up chewing from boredom. I also take away any toys that he has lost interest in, as these become 'special' again after a short absence. Hence the Stagbar will be in demand again, the rubber dumbell will fall out of favour and even the firewood basket may eventually be safe. 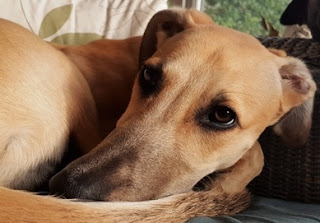 All this is natural for a five-month-old puppy and it's a delight to watch Hector enjoying his new gnashers as long as he's not sinking them into my favourite boots. I'm absurdly proud of his beautiful white teeth and I think he should be too. He certainly loves having his teeth cleaned and he's had a positive effect on Billy and Stanley's attitudes to the toothbrush too.

Posted by Jacqui Griffiths at 17:18 No comments:

As you know, this year didn't start well for us and it's brought some crushing blows. But it's important to look forward and hopefully there are happier times ahead. 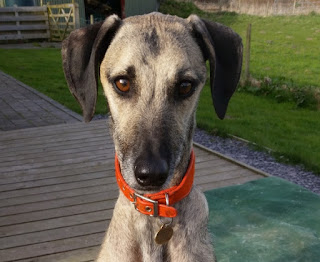 We lost our beloved Oscar on 11 May, when the lymphoma just took over. It was a very aggressive type of lymphoma and while chemotherapy kept him going for a while, the cancer grew resistant to one drug after another. On one hand, most of the time he seemed very well and happy, and you wouldn't have known there was anything wrong with him. On the other, eventually the chemo had little effect, and what effects it did have lasted a fraction of the time they were meant to.

But it did mean we had some very happy times, albeit with underlaid with a mild sense of dread. At the end of April we had a wonderful holiday in Anglesey during which Oscar was up for anything. But by that time he also had swollen glands that just wouldn't go down, and soon after we got home he started losing weight and refusing to eat. Eventually it was clear that the kindest thing was to let him go and he died with me cuddling him on the settee at home. He was only three years old but it felt like he'd been with me all my life. 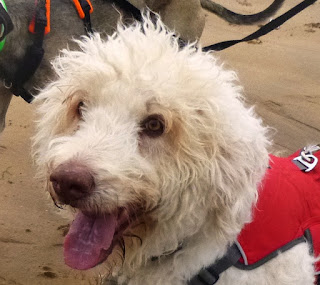 Then, less than three months later on 1 August, we lost my beautiful old friend Fargo. He’d had a tummy upset that wouldn’t go away, which turned out to be pancreatitis, but we didn’t know what was causing it. It was probably cancer, but we chose not to do any invasive tests as Fargo was already 13 years old and was quite weak. So we tried everything we could to treat the pancreatitis but nothing worked. At the same time, we’d stopped giving Fargo anti-inflammatories for his arthritis until we could get his tummy problems sorted. He still went to physio and he had tramadol and paracetamol, but he was getting very stiff. In the end, after we’d tried everything, letting him go was once again the kindest thing we could do. That came as a massive blow, so soon after Oscar. We knew Fargo wouldn’t be around forever, but we just weren’t expecting to lose him so soon. At least, again, I was able to cuddle him at home when the time came. He was a legend, even the vet was almost in tears.

So, where do you go from something like that? Not long after losing Oscar, we added Hector, the lurcher puppy, to the gang. Having him around has helped a lot as he was a new face and he helped bring all of us, dogs and humans, out of ourselves as we adjusted to life without Oscar. He and Fargo got on well, but he didn’t know Fargo for long enough to miss him terribly, and I think that's helped us too. Slowly we have adjusted to life in our current formation. 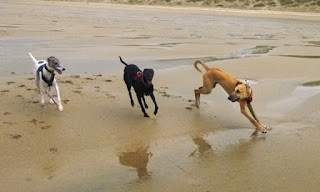 But I do still really miss Oscar and Fargo. It’s all still quite raw as you can imagine. They needed a lot of care over the last few months if their lives and that’s left a huge gap in our routines. I even miss the Fargo hair that coated everything in the house for many years. I always knew that my pack of four dogs might one day be reduced to three, but I didn’t realise those three would include a new one, and that two of my beautiful boys would be gone. But life goes on, and I’m glad to have Billy and Stanley the whippets, as well as Hector to bring love, life and laughter into every day.

The ones we’ve lost never really leave us and that, in the end, is a comfort too. Much as I can't help feeling sad at some point pretty much every day at the moment, I know it will get easier. I also think that remembering my lovely dogs with sadness is to do them an injustice. They would want me to live in the moment, and to play and laugh with the dogs that are here now. So eventually my memories of Oscar and Fargo will move away from those last few days of illness, to the happy times we shared that filled most of their lives. I wish they – and the other dogs I’ve lost over the years – were still here, but the main thing is that they were here in the first place and they had as happy a life as I could give them. In the end, I’m lucky to have known them.

It's taken me a while to be able to write this blog, but I think it's easy to feel as if most people don't understand how it feels to lose a beloved dog so I wanted to talk about it. I've found that a lot more people than I imagined do understand this grief, but I think it's important to talk about it becaus it just might help someone else out there who is going through a similar experience to know they are not alone.
Posted by Jacqui Griffiths at 17:06 No comments: