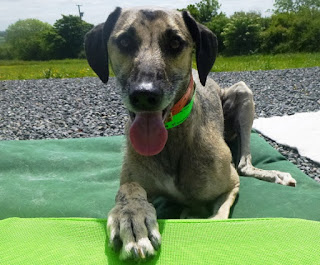 Well, it’s been a while and I really didn’t mean to be away so long. My time has been filled with writing (it’s my job, hence I neglected my blog-writing) and, most importantly, dogs. It still is filled with those things, but there’s been a ghastly change.

My beloved Oscar the lurcher has been diagnosed with lymphoma. He's only just turned three years old.

It started with a swollen prescapular lymph node just before Christmas. Really, it must have started before that, but the swollen gland was the first outward sign and Oscar seemed in very good health apart from that. Still, I thought we’d better get that checked out. The vet did a fine needle aspiration and the results came back on Christmas Eve: compatible with lymphoma. More tests were needed – an x-ray, ultrasound and a biopsy – but my vet said we needn’t cancel our planned week away as it was Christmas week and the bank holidays would delay any results to the point where it would only make a day or two of difference in terms of when Oscar could start any treatment.

So, off we went on Boxing Day for a week in Cornwall. While we were there, the node on the other side of Oscar’s neck came up and he started drinking (and weeing) more and more. We came home early and took him to the vets, where he was found to have high calcium levels which can be associated with some cancers. As there was a danger of kidney damage, he stayed in hospital on a drip for the next six days while they did his various tests and we discussed treatments. Then he started chemotherapy (Madison Wisconsin protocol) and came home.

Oscar is generally in good health at the moment, though he’s quite sensitive to one of the chemo drugs and had to spend another night in hospital when he got sick and dehydrated after one treatment. It’s early days yet and we’re still finding out how he reacts or responds to different bits of the treatment, so hopefully we’ll be able to avoid anything like that happening again.

The good days are very good, and we’ve been lucky enough to have lots of them so far, but something like a loss of appetite or sickness can happen very suddenly just when you think everything’s OK. I am always ready to drop everything and head to the vets and I'm very thankful for good pet insurance.

So, 2016 started with many tears, but then I realised they weren’t going to help anyone, least of all Oscar or the other three dogs. Strange new customs have entered our lives, such as rinsing any area where Oscar has had a wee and double-bagging his poo following chemotherapy treatments, as they are full of chemo drugs (that doesn’t sound like a big deal until you have to do it late at night on a muddy lawn in a howling gale). I don’t know how effective the chemotherapy will be, or how long Oscar will be with us. Of course I hope for a miracle, but you don’t expect a cure with canine lymphoma. Mainly I’m focused on this cancer as something he’s living with rather than dying from, and I can make sure it's a good life.


One of the most valuable things I’ve learned from dogs is to enjoy the moment. Oscar is especially good at making me do that and as long as he’s feeling well I find it impossible to be sad in his company. That doesn’t stop me waking up in the night and suddenly, horribly remembering that he has a terminal illness, but it helps me put it in perspective.
Posted by Jacqui Griffiths at 15:48 No comments: