Anyone who knows me will be able to tell you that I’m not best friends with the cooker. I have no confidence with cooking and, probably partly because of that, I really don’t enjoy it. But lately I’ve been cooking up a few wholesome treats for the dogs and I’ve loved every minute of it. So what’s brought about this transformation? 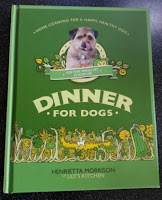 It started during my visit to Crufts earlier this year. One stand I always make sure to visit is Lily’s Kitchen, the place to get wonderful food and treats such as the beautiful Bedtime Biscuits, a perennial favourite with my lads. But this year, something else caught my eye – a beautifully designed book called Dinner for Dogs, written by Lily’s Kitchen founder Henrietta Morrison.

Now, I know that one is never to judge a book by its cover, but this one looked so nice that I couldn’t help taking a look. However, I wasn’t sold straight away. As I explained to the very helpful lady on the stand (I’m sorry I’ve forgotten her name), despite my difficult relationship with the kitchen, I like the idea of making my own dog treats because you never know what goes into the ones you buy. But having looked at a few recipe books for dogs, I’ve often been disappointed both by the intricacy of the recipes and the frankly unhealthy ingredients (large amounts of salty parmesan cheese, for example, or a recipe that included mixed dried fruit but neglected to warn you that raisins are poisonous to dogs). What I want, I told the lady, are simple, healthy, idiot-proof recipes that can be prepared quickly.

Never fear, said the lady, this book will give you those. So I took a closer look and immediately saw that she spoke the truth. So I decided to go out on a limb and buy the book. The people at Lily’s Kitchen really believe in what they do and, more importantly, they understand the reservations of people like me. So the lady I was talking to grabbed hold of the book’s author, Henrietta Morrison and got her to sign it for me with a personalised message of encouragement that made sure I didn’t just go home and leave the book on a shelf.

A couple of months down the line, I’ve tried a few of the recipes and I haven’t been disappointed. I know that dogs (especially mine) are easy to please when it comes to food, but it has to be said that my Super Fish Cakes were a triumph. My Peanut Butter and Buckwheat Kisses literally went down a treat and, since they’re not the sort of thing you give too many of in one day, I rolled some of the same mixture out to make smaller biscuit treats for taking out on walks. During the hot bank holiday weekend, I made Peanut Butter Pops to cool down my sun-worshipping whippets. And last weekend, as we were celebrating Fargo’s 10th and Billy’s fourth birthdays, the dogs enjoyed some Celebration Cupcakes.

The brilliant thing about these recipes is that I know exactly what’s gone into them. The book contains a wealth of advice about diet, with tips on what grains, vegetables and herbs to use and guidance on the calories, protein and fat content of each recipe. It suggests substitutions for certain ingredients if you want a variation on a theme, and I’ve even been able to experiment successfully by adding some grated carrot here and there. Everything I’ve made from the book has smelled divine as it comes out of the oven too, which is a pleasant change from many shop-bought products.

So, it’s safe to say that I’m now a convert. The recipes I’ve tried are quick and easy to make and it’s great to know exactly what goes into them. I can whip up a batch of biscuit treats at the weekend and use them as training rewards throughout the week. And although my dogs generally eat a complete dried food at mealtimes, it’s nice to be able to make them the a special meal now and again too. The dogs love it when they know I’m making treats for them and there are loads more recipes I want to try over the next few months.  It turns out that this is one book that’s every bit as good as its cover suggests and it’s what a reluctant cook like me has been crying out for – thanks Lily’s Kitchen! 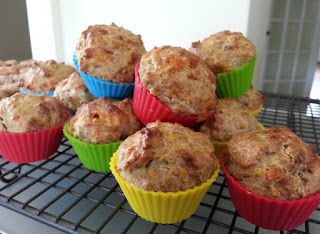 Posted by Jacqui Griffiths at 17:11 No comments: