Goodbye to a dear old friend 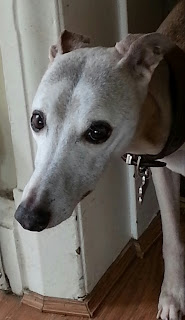 At the end of January this year we had to say goodbye to the wonderful Charlie Whippet, who was 14 years old. It was unexpected and he declined quickly, so at least I know he didn't suffer and the vet came round so he could die on the settee at home where he belonged, being cuddled by me.

Losing a beloved dog will always be a horrible experience and, although I know Charlie had a good long life and I did everything I could for him right up to the end, it rather knocked me sideways for a while. But I still had Billy and Stanley Whippet and Fargo Labradoodle to look after, and that helped. It was very sweet to see how, as I kept the routine going and watched them adjust to their loss in the weeks after Charlie's death, they all looked after me too. In those moments when I really started to miss him it was a real comfort to be able to take them out to the park where, in forgetting their troubles in play, they helped me to feel happier too. 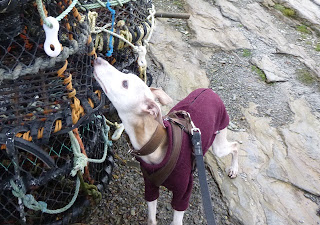 Charlie and me had many adventures together and I'll never forget what a great travelling companion he was. There were some hard times - most notably when he was paralysed and had to have spinal surgery in 2010 - but we pulled through that together and his gentle, patient bravery was an inspiration. Charlie bounced back from that, albeit with a bit of a wobbly gait, and I know he really enjoyed his life right up until his final illness.

We'd had a great holiday together in Cornwall over the New Year and, after we got home, Charlie had enjoyed trotting around in the snow. I'll never forget the sight of him wrestling with the other whippets just a couple of days before we lost him. Being a lot younger, Billy and Stanley always recognised that they were fitter and more agile than Charlie so they wrestled with him on his terms and were never too rough.

So, although the sadness of losing Charlie will never quite go away I have lots of happy memories, from bringing him home as a chubby puppy back in 1998, through his crazy adolescence (he could be a right tinker back then), and then his growing into a splendid adult and a beautiful old gent.

He was a trusted friend to me and a role model to the young Fargo and, later on, to Billy. 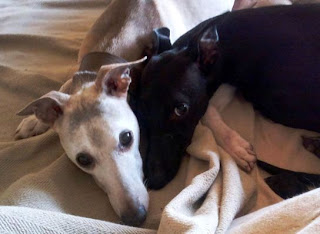 More recently, Charlie had a very positive steadying influence on Stanley, who came to us as an anxious 18-month-old foster dog but who settled in so well we had to adopt him. Stanley turned out to be quite similar to Charlie in personality, and I think he recognised that they had a lot in common. Charlie used to like to sleep on his own, but I'd often find him and Stanley curled up together like two peas in a pod. And I can still see Charlie's influence on Stan, who is much calmer than he used to be and is able to take things in his stride without getting anxious.

So although Charlie's no longer around, in some ways he lives on for us. I'll always miss him, but when he pops into my head my first thoughts are always happy ones. It was a privilege to know Charlie and I'm so glad I was with him through all the stages of his long and happy life.

Posted by Jacqui Griffiths at 15:32