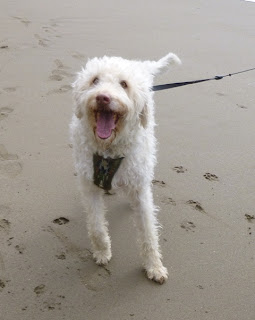 Where dogs' legs are concerned, I find that no news is generally good news. So I haven't written a dog-leg diary for a while because there hasn't been much to report on the dog-leg side of things. Although the winter weather caused some stiffness for Fargo, we countered that with steady exercise, regular trips to the physiotherapist and dips in the hydrotherapy pool. All was well.

But recently Shahad, our physiotherapist, noticed that Fargo's left hind leg is stiff and he's not putting all his weight on it. I must admit that for all the attention I pay to Fargo's legs, I hadn't noticed this. It's quite a subtle change in his gait and it's most obvious when he walks very slowly. Shahad's expert eye detected it though, and he also pointed out that Fargo has started to lose some muscle condition on that leg. As a result, we're off this Thursday to see the vet and get Fargo's leg checked out.

Of course, there can be many reasons for lameness in dogs. But I can't help thinking this could be the return of the dreaded cruciate ligament issue. Fargo had TPLO surgery for a ruptured cruciate ligament in his right hind leg almost two years ago and I know it's quite common for the problem to affect both legs eventually. If his other ligament has gone then that probably means another operation.

However, there's no point in worrying about it before we know. We'll see what Thursday's appointment brings and focus on the positives. Because of Fargo's regular physio appointments, I know we've spotted the problem as soon as we could and that he hasn't been suffering in silence for weeks. Thankfully he's insured so he can have any treatment he needs and, whatever the problem is, it's good to know we'll be seeing a vet who is an expert in this field. And if Fargo does need surgery and the extensive rest that follows it, hopefully we're heading for a warm, dry summer so he can chill out in the garden and sniff at the world going by.
Posted by Jacqui Griffiths at 12:38