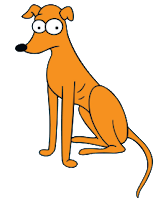 Ex-racing greyhound Santa's Little Helper lives with The Simpsons and is especially close to Bart. He was adopted by the family when Homer, realising that he had no money to buy Christmas presents for his family, tried to win some by betting at the dog track. Homer saw the name of the dog as a good omen, and so lost his stake when Santa's Little Helper lost the race. Seeing the dog cruelly abandoned for his lack of success on the track, Homer and Bart then took him home, where the rest of the family assumed he was their Christmas present. 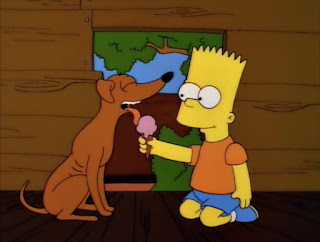 Santa's Little Helper is a cut above the average cartoon dog. Despite being involved in many far-fetched storylines, for a cartoon dog he's pretty realistic. In a medium where dogs quite routinely wear clothes, walk on two legs and speak in human voices, this fictional canine actually behaves like a dog. He's playful, inquisitive and has bags of character, and when he gets bored he can be destructive. And he is sometimes bored and neglected, when the Simpsons get preoccupied with other matters.

Like many dogs in the real world, Santa's Little Helper is generally treated well by his family, but there are times when the Simpsons neglect his needs or misunderstand his behaviour. He plays a minor role in most episodes that reflects how easy it is to take our own dogs for granted - a fact which is thrown into stark relief in the episode where Santa's Little Helper needs life-saving surgery and his attempts to alert the family to his illness are ignored until he collapses in front of them.

And although he is a dog that became a Christmas present, Santa's Little Helper conveys important messages about responsible dog-ownership. In the very first episode of The Simpsons, when the family acquires him, he highlights the plight of abandoned racing greyhounds. He shows us the gaps in understanding between dogs and their humans - gaps that can often be addressed with a little effort on our side. In the episode where Bart takes him to a dog-training school after his behaviour gets out of hand, we see an example of harsh training methods rejected by Bart, who refuses to use a choke-chain on his dog. And in the same episode, it's by playing with his dog that Bart finally manages to reach an understanding with him, creating a stronger bond that leads to better behaviour.

At a time when rescue charities are bursting at the seams with unwanted dogs and the media often promotes irresponsible attitudes to pets, Santa's Little Helper often provides a refreshingly common-sense portrayal of a dog's life. And whatever happens to him (including one occasion when Bart temporarily discards him for a better trained dog), the mutual devotion between him and his family emphasises that a dog is for life, not just for Christmas.
Posted by Jacqui Griffiths at 15:59 No comments: