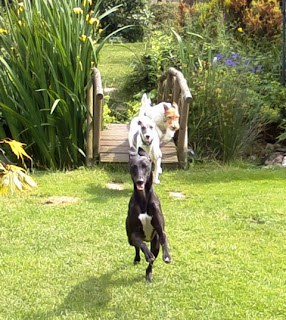 A year ago today I made an important new friend: Stanley the Whippet. Stanley was 18 months old at the time and his owner had contacted Scruples Whippet Rescue for help as he was being bullied at home by her four-year-old Whippet. I offered to foster him until a suitable home could be found.

Many people tend to assume that a rescue dog has been badly treated, but having first met Stanley at home with his owner, I know he was loved and well cared for - to the extent that when things went wrong and he was obviously unhappy, his owner did the right thing and made the difficult decision to rehome him responsibly.

Stanley is very much a 'people' dog and, although he's pretty well balanced, he can get anxious if he's left alone too long. His owner worked part-time but her hours of work had changed, and Stanley hadn't taken to the new routine too well. His anxiety was preventing him from settling down at night when, instead of sleeping, he spent some time barking, chewing the furniture and peeing on the floor. On top of that, the other dog was stealing his food, so mealtimes were also fraught with anxiety.  All of these were recent changes in his behaviour and, whether the bullying was responsible or whether some of it was caused by Stanley's own anxious behaviour, he was caught up in a vicious cycle. 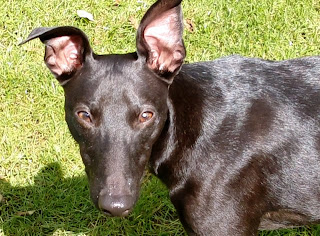 So I did have some concerns about introducing Stanley to the two Whippets and a Labradoodle I already lived with. They're generally quite a caring, sharing bunch, but what if they started ganging up on the anxious newcomer? I'd spoken to the people at Scruples and, reassured that if that was the case he'd be placed somewhere else, I went to collect him.

Stanley is a powerful dog with a lot of energy, and as soon as I met him he jumped up to try and lick my face. He was understandably anxious, especially when we put him in the car to take him away from his home, but he's also a very trusting soul. His name wasn't Stanley but I called him that straight away and he's always answered to it.

In order to get rid of some of Stanley's stress and ease relations between him and my other dogs, I started him off with a walk on the park as soon as we got home. I'd been told that he pulled really badly but I put him on a harness and he was fine. In fact he really enjoyed his walk and, although he was clearly a bit anxious for the first few days, there was no peeing in the house or any of the other problems he'd had at home. Meal times were a bit of an issue for a few days as Stanley seemed to expect his food to be stolen, which meant he left it as soon as anyone looked at it and Billy, my youngest Whippet, was ready to jump in and take it. But things soon settled down and Stanley bonded well with Billy. In fact, he bonded well with all of the dogs and they all eat happily in the same room before Stan and Bill swap over to clean each other's bowls. 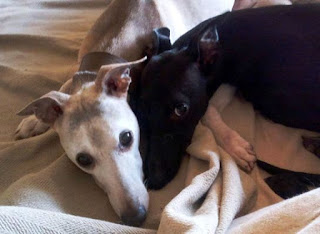 Stanley's fostering soon came to an end as he just fitted in so well here that we had to adopt him permanently. Over the past year he's learnt a few things he didn't know before - most importantly the value of a nice quilt to curl up in. He's still careless about where he puts his feet, which can earn him a grumble from any sleeping dog he decides to walk over. And he still doesn't consider any of the dog beds to be his own; he'd rather curl up with Billy or Charlie, but they're good friends so they don't mind. In character and build he's a lot like Charlie, my 14-year-old Whippet, and the two of them play wrestling games that take into account Charlie's age and wobbly legs. Billy is closest to Stanley in age and they enjoy chasing up and down the garden or playing on the park, as well as accompanying me on an early-morning run. And with Fargo the Labradoodle, who likes to play chase games without chasing (he knows he'll never catch a Whippet), Stanley enjoys a game of wits by trying to steal toys. 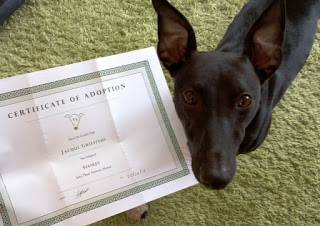 All in all, Stanley is a real charmer with a very sweet disposition. He's one of the most facially expressive dogs I know and he talks a lot with his eyes and ears. He can get over-excited and barge the other dogs out of the way when he wants attention. But he's also eager to please, so if you tell him to wait he'll do his best to remember his manners. And despite his anxious disposition he's very trusting, so as long as he can check with me that everything's alright he'll take anything in his stride.

I'm so glad I met Stanley a year ago and now I can't imagine being without him. He seems to complement each of the other dogs perfectly, as well as adding his own unique personality to the house. He's always good for a cuddle or a game and although I didn't know him as a puppy, I can still see the puppy in him. It's as if he's always lived with us which is good, because this is his forever home after all.
Posted by Jacqui Griffiths at 16:40