What I did on my holidays by Fargo Labradoodle

Hello there! Fargo here. You may know that a few weeks ago, we all went on our holidays to North Wales.


What with my knee operation last summer, it had been a year since our last holiday and we’d taken Stanley Whippet on board since then. Charlie’s getting on in years and my leg can get stiff, so while we were looking forward to some good walks in the countryside, we also hoped for some sunny weather to flake out in.


We stayed in a cosy little cottage at a place called BachWen Farm overlooking Caernarfon Bay. We had our own secure garden with a gate out into the paddock, and from there we could go straight down to the sea! We could see the sea and the mountains from our garden and we all enjoyed running around the paddock, especially Billy and Stanley. Nobody could keep up with those two, but they run round in big circles so I just waited to catch them every time they came round again!


It was the last week in March and the weather was really summery so we were able to go out loads and sunbathe in the garden when we got back. 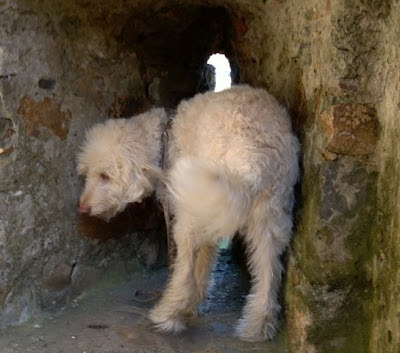 …and to a place called Newborough on the Isle of Anglesey where there were woods and a beach in the same place – perfect! It was thirsty work though, so here’s a picture of me on the beach, having a drink from my brilliant Tazlab travelling bowl in the company of Charlie and Stanley. 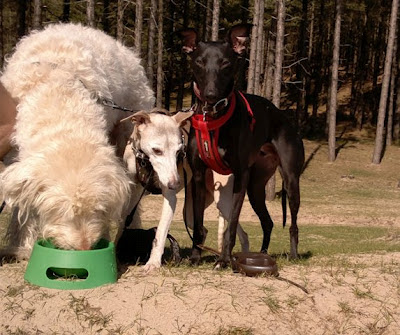 One day, we all went on an old steam train on the Ffestiniog and Welsh Highland Railways. We caught the train from a place called Porthmadog, which I thought was fitting although I understand it’s not pronounced with a ‘dog’ in it. 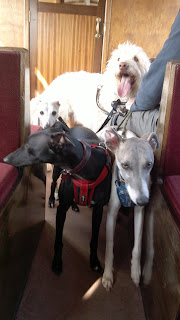 The people who worked on the train were really nice – when they saw there were four of us dogs, they put us in a carriage at the end of the train so we wouldn’t get trodden on.


It’s rare that we all stay still in one place long enough to have a photo taken together, so crowding ourselves into the aisle of a train carriage has its benefits. We had our 15 minutes of fame after HoundHead sent our photo to the Dogs on Trains website!


We got off the train at a very pretty place called Beddgelert, where a legendary dog who suffered a miscarriage of justice was buried hundreds of years ago.


We all felt very proud, and Billy showed his sense of solidarity by having a long wee on the sign that points to Gelert’s grave. I think he meant it as a compliment. A little bit further past the grave, in the remains of a stone building, we saw Gelert himself! Well, it was a statue of him really but it took us all by surprise and we did some barking. We all made friends though, even if Gelert didn’t have much to say for himself. 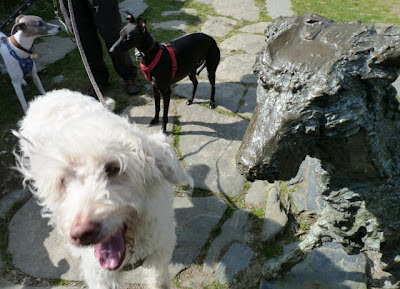 On the way back we travelled in the open-air carriage of the train. I wasn’t sure about this at first, but once I realised nothing bad was going to happen I quite enjoyed it. The Whippets took it all in their stride and there was also a black Labrador in the train who sat on the slatted benches. She kept trying to jump out of the windows though, whenever she saw one of her favourite walking spots. Her owner said we were all really well behaved.


We had such a lovely time in Wales that we really didn’t want to leave – I’m always reluctant to get in the car on the last day of my holidays. But the weather helped us feel OK about it because the first signs of rain came on the morning we had to leave. We can’t wait for our next holiday, so now we’re busy looking for another seaside cottage that will welcome all four of us dogs! 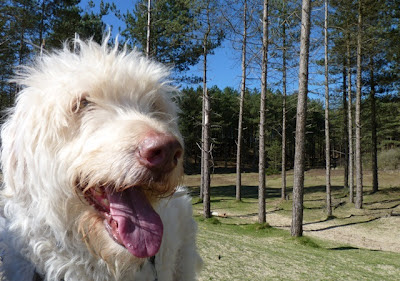 Posted by Jacqui Griffiths at 12:11