We here at HoundHead Towers are absurdly proud today.

Just a few minutes ago, the postman delivered a Stanley Whippet’s official certificate of adoption from Scruples Whippet Rescue! 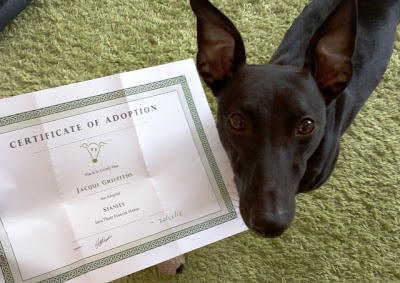 It was a proud moment for Stanley, who’s been treating the place like his own pretty much since he arrived here as a foster dog at the end of last November.

As I write this, he’s celebrating by joining his whippety friends Charlie and Billy in a spot of sunbathing (Fargo likes to lie in the shade as he’s a woolly fella). They’ve just managed to move from under the skylight indoors to the flagstones just outside before stretching out again. Stanley is hoping that, since he posed nicely for a picture with his certificate, he’ll also get a nice treat in a few minutes.

He tells me that later, when it cools down a bit, he and Billy will probably chase each other around like lunatics for a while before settling down on the settee.

I’m so glad Stanley found us – I was only going to look after him until he found a permanent home, but he’s such a character and brilliant fun to have around. I couldn’t imagine being without him now.
Posted by Jacqui Griffiths at 13:38