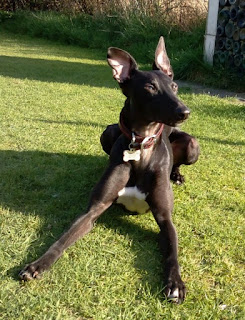 Yesterday was not the most fun Wednesday we’ve ever had here at HoundHead Towers. I was looking after a friend’s Wire Haired Fox Terrier, an energetic one-year-old who loves to spend her day playing with my lot. For some reason, she especially likes Stanley and never tires of chasing him around, trying to nip his tail.


Anyway, it was all going pretty well yesterday morning – Foxy had been dropped off by her owner and we’d got past the initial frenzied greetings that tend to happen when these five get together at my house.


We went out into the garden together, so I could make sure nobody got up to any mischief. As usual, Billy and Stanley tore off down to the end of the garden, and Foxy went with them. There was some excited barking but all seemed well, until I called Stan to me and saw that he had a big gaping hole in his side! I’m pretty sure, though I can’t prove it, that Foxy had nipped at Stanley while he was running – the wound was at exactly the right height for her, and she is a bit of a run-and-nipper.


This had happened in the blink of an eye. There was no yelping and Stanley didn’t seem at all bothered by the wound. In fact, he didn’t even seem to notice it until some half hour later. It wasn’t bleeding profusely but, since it was an open wound, I needed to get him to the vets.


As I don’t drive, the first thing I had to do was track down a dog-friendly taxi firm. The receptionist at the vets helped me with that and, after a careful drive thanks to a very considerate taxi driver, we got to the surgery. Stanley was very brave and let the vet shave the area around his wound as long as he could stand on his hind legs and hide his face while I cuddled him. He got some compliments from the vet about his good looks, glossy coat and fantastic ears too.


Since the wound doesn’t bother Stan but being left at the vet’s for an afternoon anaesthetic would, we decided against stitches. He’ll have a scar, but I don’t think it will be that bad once it’s healed and, as a Whippet with a very thin coat, he’s already collected a few scars from minor bumps and scrapes – they show up all the more because they contrast with his black fur. So we headed home with some antibiotics and that should be that. Stanley was perfectly happy to walk the couple of miles back and I was pleasantly surprised to find out that, despite what his previous owner thought, he walked very well on a collar (we couldn’t use his harness as it would have rubbed on the cut). So there you go – a pleasant sort of anticlimax in the end, and so far, so good on the healing front. 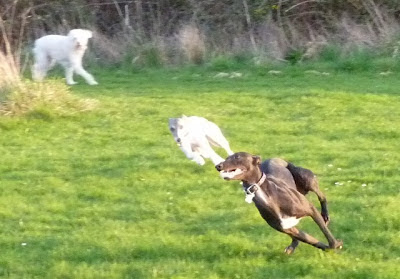 It’s an odd thing with Whippets. People say they’re prone to cuts because they have very thin skin, but I actually think it’s because their coats are too thin to protect them. A Shar Pei on the park took a snap at Fargo a few weeks ago, and all it got was a few strands of his woolly fur, but Whippets don’t even have an undercoat, just the one thin layer for any teeth, thorns or other sharp objects to get through. To make matters worse, these dogs love to charge through undergrowth, chase each other and, certainly in Stanley’s case, barge each other out of the way. For all their trembling at the vet’s, they’re absolutely fearless when they want to be.


Today, apart from the hole in his side, all is back to normal and Stan already wants to go chasing about as usual. I do admire his carefree attitude, but I’ll be keeping a close eye on him in the future, especially when he’s playing with fellow youngsters.
Posted by Jacqui Griffiths at 17:09