Fictional dog of the week #16: The Bumpy Dog 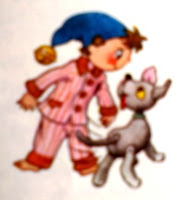 I've owned a couple of bumpy dogs in my time – you know, the sort that seems to find it impossible to sit still. They’re incredibly friendly dogs and they wag their tails all the time, knocking things over while remaining blissfully unaware of the chaos they leave behind them. Fargo the Labradoodle was made for this category, as was Murphy the Wolfhound crossbreed before him.


Enid Blyton knew exactly the sort of dog we’re talking about, and she made him the star of Noddy Book 14, Noddy and the Bumpy Dog.


Where does the Bumpy-Dog come from? It’s a bit confusing really. He’s definitely from Toy Dog Town, but dogs don't seem particularly welcome there. In fact, it turns out that the dog is homeless.

Noddy meets the Bumpy Dog after an encounter with an angry sailor and his bicycle leaves the dog with an injured paw. The sailor accuses Bumpy of having run out in front of his bike and clearly sees him as a nuisance. We never find out the truth of who’s to blame for the accident, but Noddy’s kindness wins him the dog’s friendship.

Enthusiasm is the word that pretty much sums up a bumpy dog. Their friendship often includes non-stop tail-wagging that leaves a trail of breakages in its wake, and hearty greetings that result in a spot of sitting on the floor with a face-full of slobber. They’re a good advertisement for consistent training, these dogs, but the Bumpy Dog doesn’t seem to have had any. His wagging tail hits Noddy and Tessie Bear in the face, he licks everyone’s faces, and he has a habit of sitting in Noddy’s chair, whether it’s in his car or his house.  As Noddy says, “He’s a very very nice dog, but awfully bouncy and jumpy.”


But bumpy dogs know how to charm, too. When Noddy tells Bumpy to go home, a familiar picture is painted:

“Bumpy whined sadly. He waited till Noddy was sitting in his arm-chair and then he ran to him and put his head on his knee and looked up at him so lovingly that Noddy couldn’t help loving him back, even though he was such a bumpy dog.”

Attitudes to dogs have changed since the book was written in 1957. But while Noddy and the Bumpy Dog contains some outdated ideas about dog behaviour, it does eventually espouse a more modern approach. 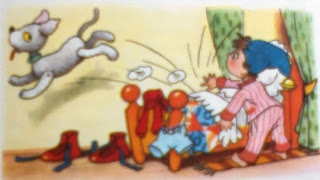 Unfortunately, the Bumpy Dog gets a smack for his attempt to sleep on Noddy’s bed – an action that makes Noddy feel sorry, but which seems to have been acceptable when the book was written. Apparently it was also alright to turn the dog out overnight, but in doing so, Noddy leaves his door unlocked so a goblin can get in and steal his money. Even as a child I saw a kind of justice in that.

And at least, when Mr Tubby Bear demands to be allowed to give the dog a “whipping” for digging up his seeds, Noddy won’t let him, nor will he let Mr Plod lock him up. In fact, he shows some proper understanding in his defence of the dog: “He didn’t mean to be naughty.”


Rather than train such a loveable but naughty dog, Noddy decides to get rid of him by buying him a bone and taking him to the Dark Wood where, having buried the bone, Bumpy will stay and guard it. As it turns out, this is where the Bumpy Dog saves the day, finding Noddy’s stolen money, arresting the goblin that took it and even carrying him to the police station. 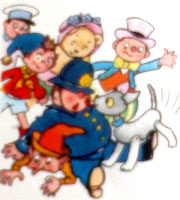 After the Bumpy Dog's heroism, thoughts turn to finding him a home. Although Noddy would like to keep him, it wouldn’t be practical: “I’d like him to live with me – but he’s so very bumpy. I mean – I’d be sitting on the floor most of the time if I had him.”


In the end, it’s Tessie Bear who takes the dog, at the same time ushering in a more modern approach to dog training by promising to teach him manners so that he’ll soon be “gentle and sweet”. It’s a happy ending for a homeless dog, with proper thought given to which home will suit him best.


What breed is Bumpy?
Bumpy is something of an everydog, a type rather than a specific breed. However, from the original illustrations I’ve always thought of him as a mohair Poodle made by Steiff, Merrythought or someone like that. He’s very similar to a grey Poodle toy I used to have, which was a lot like the jointed dog in this group, apart from its colour: 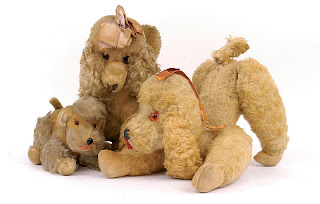 More recently, the Bumpy Dog has had a makeover. He’s now a yellow dog who looks more like a Labrador than anything else. I prefer the older Bumpy, but given his everydog status and the popularity of Labradors today, his new look is understandable. 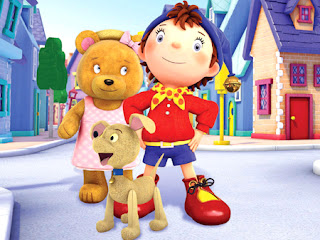 There have been various illustrations over the years that take in variations between these two, and that means Bumpy can be anybody's dog. The main thing is that he's such a loveable chap and in the end, he gets the understanding and care that he needs.
Posted by Jacqui Griffiths at 12:44