Fictional dog of the week #15: Nana 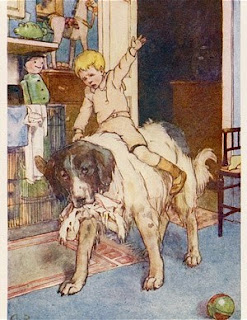 Nana, the big dog who cares for Wendy, John and Michael Darling in JM Barrie's Peter Pan, has been variously represented as a Newfoundland, a St Bernard and – since the story began its life as a play in 1904 before being published as a novel in 1911 – whatever shaggy dog costume the wardrobe department can come up with. The Barries had owned a St Bernard called Porthos and then a Newfoundland called Luath, but both the play script and the novel make it clear that she is a Newfoundland.


So far so good – you might expect a large, gentle dog to be portrayed caring for children within a family. But at the beginning of the novel we find out that Nana doesn’t belong to the Darlings – she’s employed by them:

“Of course, they had a nurse. As they were poor, owing to the amount of milk the children drank, this nurse was a prim Newfoundland dog, called Nana, who had belonged to no one in particular until the Darlings engaged her. She had always thought children important, however, and the Darlings had become acquainted with her in Kensington Gardens, where she spent most of her spare time peeping into perambulators, and was much hated by careless nursemaids, whom she followed to their homes and complained of to their mistresses. She proved to be quite a treasure of a nurse.”


Nana baths the children, nurses them when they’re ill and walks them to school, always carrying an umbrella in her mouth in case of rain. She’s opinionated too. For example: “She believed to her last day in old-fashioned remedies like rhubarb leaf, and made sounds of contempt over all this new-fangled talk about germs, and so on.” 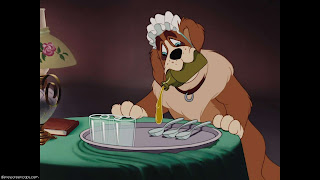 But this isn’t a world where dogs are regularly employed as nurses. The other nurses who wait for their charges at the school are humans who sit and wait on benches while Nana lies on the floor. We’re told that this is the only difference between them – but there’s also tension between them. While the other nurses try to ignore Nana “as of an inferior social status to themselves,” Nana herself “despise[s] their light talk.”


Nana doesn’t draw the line at other nurses either – she resents visits to the nursery from Mrs Darling’s friends, and if they do come she rushes around to make sure the children are well presented.


The result is that “no nursery could possibly have been conducted more correctly,” and Mr Darling knows this. But he, too, feels a little uncomfortable with his canine employee. Not only does he “wonder uneasily” whether the neighbours talk about him – he’s also al little threatened by Nana, and troubled by an occasional feeling that she doesn’t admire him.


Between adults and chidren
By having the Darlings employ a canine nurse, Barrie immediately draws a stark contrast between the worlds of children and adults. 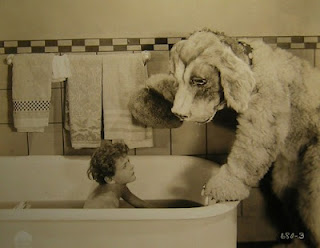 While the children can accept and benefit from the ministrations of a large dog without question, the adult world is tightly bound by ideas about behaviour, class, practicality and responsibility. Mr Darling is uncomfortable at employing a dog and at his children’s belief in fictional stories, while Mrs Darling locks away her “romantic mind” in “tiny boxes, one within the other” and neither her husband nor her children can access the innermost one. Both Mr and Mrs Darling have their moments of gaiety, but these are constrained by the rules of adulthood.


On one hand, Mr Darling’s world of social constraints and correct behaviour threatens to do away with impose adulthood too quickly on his children. On the other, Peter Pan tries to stunt the children’s development while turning Wendy into some freakish child-mother, unable to cope with the responsibilities of caring for the Lost Boys. None of these characters are bad people, but they are unbalanced, either too strictly grown-up or too resolutely childish - and the Darling children are caught in the middle.


Nobody, apart from Nana, wants to let the children grow up at their own pace. With her kennel in the nursery, Nana occupies a space between the two worlds. She is devoted to her charges – and therefore to the world of the nursery – and as she nudges the children into line on their way to school, she is also gently nudging them towards an adulthood that will come in its own good time, and that can still include a sense of wonder.


Nana’s function as a bridge between childhood and adulthood is made especially clear when she tries to catch Peter Pan as he flies out of the nursery window, tearing off his shadow in the process. And probably, it’s only Nana who would be able to dissuade the children from flying off with Peter, if Mr Darling hadn’t chained her up outside in a bid to show who’s boss. 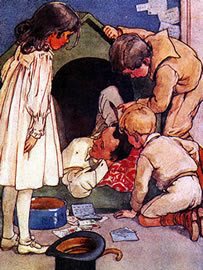 Mr Darling’s response to the children’s disappearance continues Nana's blurring of  boundaries. Taking the entire blame upon himself, he crawls into Nana’s kennel and refuses to come out until his children return, even travelling to work in it. He no longer worries about his neighbours’ opinions of him. In fact, he is completely humbled and defers entirely to Nana on all matters. He can’t quite shake off the adult world – in fact, he becomes something of a celebrity who is invited to attend many society parties in his kennel. But this celebrity status illustrates how superficial many adult values are, highlighting instead the importance of an open mind for adults and children alike.


Crucial canine
Nana plays an important role in the story of Peter Pan; a role that she couldn't play if she wasn't a dog. Of course, anthropomorphism plays a part in Nana's characterisation - for example in her assumption of social values and her expression of opinions on nursery medicine. But at the same time, Nana stays resolutely canine. Barrie's wish to emphasise Nana's canine nature can be seen in the original stage directions for the play of Peter Pan, which say that she “will probably be played by a boy, if one clever enough can be found, and must never be on two legs except on those rare occasions when an ordinary nurse would be on four.” 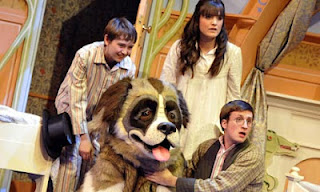 These behavioural traits distance Nana from the idea that she might simply be a human in dogs’ clothing – a distance that makes it strangely apt that Nana has most often been played on stage by a man in a dog suit. In fact, it’s impossible to pin Nana down into one world or another – she simultaneously occupies the world of humans, of dogs, of adults and of the nursery, and in doing so, she shakes the foundations of every assumption we make about any of those worlds.
Posted by Jacqui Griffiths at 13:39