Triumph and tragedy for garden birds

So far, this week has brought good news and bad news on the bird front.


We have several birds nesting in or around our garden, including robins in the robin nesting box for the first time. And while it seems as if it’s been raining non-stop for weeks, there have been a surprising number of clear mornings when all of birdkind seems to go bobbing about the garden looking for food and nesting materials. 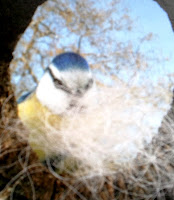 On those mornings, Fargo has been doing his bit for their burgeoning families, as I give him a good going over with the undercoat rake and spread the proceeds around the garden. I’ve watched blue tits, coal tits, robins, wrens and goldfinches all collecting it up within the space of an hour or so, and it’s really nice to think that Fargo’s hair is helping to keep the various baby birds safe and warm. They’re too quick for me to get a good photo, so here’s an artistic impression of sorts.


Unfortunately, it turns out that not all my dogs are completely bird-friendly. As I finished congratulating myself on the Whippets’ cat-like ability to deal with big spiders, flies and any other crawlers/flyers that bother me, the feline qualities of these dogs came back to haunt me.


It hadn’t rained for the whole day, and I was watching Billy and Stanley pottering around the garden when Billy suddenly dived into the hedge and came out with something in his mouth. Even as I ran down the garden to see what it was, he dropped it and Stanley picked it up. Stan left it when I told him to, but by the time I was close enough to see that it was a fledgling dunnock, the poor thing was already breathing its last.


It’s really sad. Only the previous day, I’d been watching that dunnock (or one very like it) sitting on the lawn by the hedge under the watchful eye of its parents. Now, I keep seeing the adult dunnocks and I feel really guilty.


Of course, Billy was only doing what comes naturally and he didn’t even want to kill the bird. He’s often caught frogs, which he picks up and drops to see if they’ll move. They play dead and as long as I keep him away from them long enough, they’ll recover and hop away unscathed. Despite his interest in wildlife and a tendency to treat small animals as playthings, Billy has a very gentle mouth, but baby birds just aren’t that resilient and I’m going to keep a watchful eye on Billy and Stan to make sure they don’t do away with any more feathered friends.


Looking on the bright side, they keep the garden pretty clear of cats, so despite yesterday’s tragic event, at least one major threat to birdkind is minimised.

Posted by Jacqui Griffiths at 14:15