Fictional dog of the week #14: Pilot

Brontë-world – a place of windswept moorland, raging passions, men with big heads (in Charlotte's case at least)… and dogs.

Dogs don’t play a huge role in the novels of the Brontë sisters, but they can’t quite be ignored either. For instance, Mr Rochester’s dog Pilot is barely seen in Charlotte Brontë’s Jane Eyre, and yet his very presence tells the readers a fair amount about the novel’s two main characters. 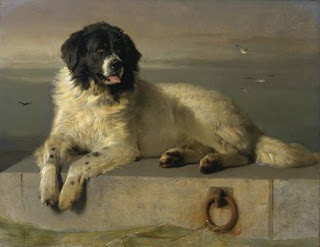 While his breed is never actually specified in the novel, it’s clear that Pilot is a Landseer Newfoundland – so-called because this breed was a favourite subject of 18th-century painter Edwin Landseer. On her first encounter with him and Rochester, Jane describes Pilot as ‘a great dog, whose black and white colour made him a distinct object against the trees… a lion-like creature with long hair and a huge head.’


Pilot immediately makes one thing abundantly clear about Rochester: while he may be no oil painting, he has an inner beauty that a dog, unencumbered by aesthetic judgement, understands. Pilot’s trust in Rochester, his protectiveness of him and obedience to any command he gives, suggest the respect due to a leader who is courageous, gentle and kind. In fact, the gentle side of Rochester’s nature is hinted at the very next time Jane sees the two together when, resting up after his fall from his horse, he watches Pilot ‘basking in the light and heat of a superb fire’ with Rochester’s young ward, Adèle, kneeling next to him.


As well as providing a simple symbol of Rochester’s better qualities, Pilot also embodies Jane’s own priorities. A plain orphan girl, well-educated but with no expectations beyond the role of governess, Jane doesn’t worry herself with the world of superficial beauty and instead looks to find beauty within. As the embodiment of both Jane’s and Rochester’s strengths, Pilot also subtly reinforces the sense that the two are soul mates. 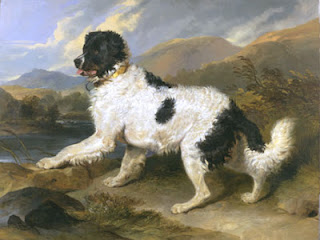 Pilot also helps to bring the novel to life in the mind’s eye. Rochester and Pilot complement each other physically, as both have an athletic build, a large, shaggy head and a dogged personality. By pairing Rochester with such a picturesque and often-painted dog, Charlotte Brontë succeeds in producing a striking visual image of him using words alone.

When Jane returns to find Rochester, blinded and crippled, ‘his old dog, Pilot’ is still with him but both seem out of kilter; weakened by age and loss. In this scene, it is Pilot – ‘removed out of the way, and coiled up as if afraid of being inadvertently trodden upon’ – who foreshadows Rochester’s own recovery. Pilot is rejuvenated at the sight of Jane, pricking up his ears, yelping and jumping up in excitement. Rochester’s recognition of Jane and his own rejuvenation – the partial restoration of his sight and the birth of their child – is a more gradual process, but as prefigured by Pilot, it comes sure enough as the soul mates are reunited and balance restored.
Posted by Jacqui Griffiths at 12:24