Fictional dog of the week #13: Wordsworth 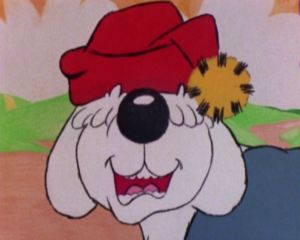 It’s a traditional image, the child who’s supposed to be asleep with the lights out reading surreptitiously by the light of a torch. Take that a step further and you may just arrive at Cosgrove-Hall’s tripped-out 1970s kids’ cartoon series Jamie and the Magic Torch.


Every episode would begin with Jamie’s mum tucking him up in bed and wishing him goodnight – but as soon as the lights were out he’d be wide awake, and his dog Wordsworth would scurry out from under the bed carrying a torch that opened up a helter-skelter portal to another world called Cuckoo Land.


Wordsworth is an Old English Sheepdog – a breed that was immensely popular in the 1970s after the Dulux TV commercials shot it to stardom with such force that many people still know these dogs as ‘Dulux dogs’.


Wordsworth speaks with a kind of ‘country bumpkin’ accent, possibly because of the breed’s pastoral associations but in this crazy world, who knows? He wears a red bobble had over a fringe that completely covers his eyes, and he has a mischievous sense of humour. Like many a canine sidekick in children’s animation, he can be a bit cowardly and he’s not quite as smart as Jamie. But he is the faithful companion that any child needs when embarking on nocturnal adventures in an alternative universe, and he always makes sure Jamie is safely back in his own bed before morning.


Originally broadcast by ITV in 1976-1979, Jamie and the Magic Torch enjoyed a resurgence of popularity in the 1980s. It was written and narrated by Brian Trueman, who was later responsible for such gems as DangerMouse and Count Duckula. 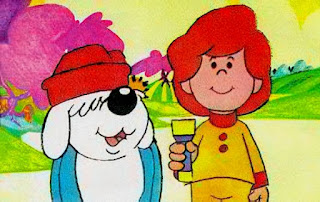 But for me, nothing holds a candle to Jamie and the Magic Torch, which struck the perfect balance between waking and dreaming, sanity and madness, with animation reminiscent of the Beatles’ Yellow Submarine, a surreal cast of characters and an insanely catchy intro song – and of course, that essential companion for tripped-out nocturnal journeys, a lovely big dog.

Watch an episode to see what happens when Jamie and Wordsworth encounter The Ghost of Spiny Mountain.
Posted by Jacqui Griffiths at 13:32