Fictional dog of the week #9: Sebastian the Incredible Drawing Dog 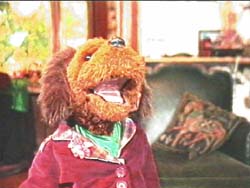 Kids love art, right? And they love stories. And a lot of them love dogs. So what could be better than a children’s BBC TV programme in which an artistic dog draws pictures to accompany the stories read out by the bloke who shares his studio? Enter Sebastian, the Incredible Drawing Dog and his friend, a youthful Michael Barrymore.


Sebastian was a puppet, a brown dog of no specific breed who I remember wandering around in a dressing gown a lot of the time, although any existing pictures seem to show him in a cravat and blazer. Maybe it was Micheal who wore the dressing gown. Anyway, in each episode, Michael would read a story from a big book after some comedy business that would see him and Sebastian chatting and bickering about a relevant subject. 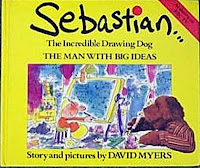 The series was devised and written by cartoonist DavidMyers, who must have drawn the pictures. In my experience, barely anyone remembers this TV series. It was aired in 1986 or thereabouts (I’ve seen 1987 mentioned somewhere) and I was in my late teens at the time, during that period when you watch programmes that are aimed at much younger people, probably because you don’t want to grow up yet.

I can’t find a single picture of Sebastian and Michael Barrymore together, and Barrymore’s IMDB biography doesn’t even mention the series. The series would have been aired just as Barrymore hit the big time as one of the UK’s most popular TV presenters, so perhaps he simply moved on to bigger and better things. Whatever the reason, Sebastian the Incredible Drawing Dog generally seems to have faded into the mists of time, which is a shame because it was one of those programmes that combined art, storytelling and comedy, and I think it’s worth remembering.
Posted by Jacqui Griffiths at 12:27