Fictional dog of the week #11: The Hound of the Baskervilles

As any tabloid editor knows, there’s nothing like whipping up a frenzy about ‘devil dogs’ to capture readers’ imaginations. So, when Arthur Conan Doyle put his phenomenally popular detective Sherlock Holmes face-to-face with a hell-hound, the result was perhaps one of the most popular detective novels ever written. 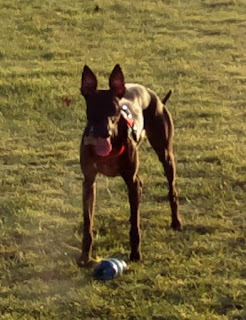 
Aside from the popularity of Sherlock Holmes, the novel’s brilliance in capturing the reader’s imagination owes a lot to its relation to the numerous ‘black dog’ legends of British folklore. Both the novel’s readers and the characters within it ‘know’ these legends to be mere stories – and yet the legends are so old that they seem somehow ingrained in the psyche, allowing that delicious hint of doubt (or suspension of disbelief) to creep in.


Conan Doyle set his story in Dartmoor, Devon, where his fictional Baskerville family lives under an age-old curse involving a hellhound. A historical family record tells how the curse began two centuries before, when Hugo Baskerville kidnapped and imprisoned a yeoman’s daughter who he was infatuated with. The girl escaped and Baskerville, swearing to give his soul to the powers of evil if he could catch her, rode after her across the moor accompanied by his friends and hounds. Both the girl and Baskerville were later found dead. But while she had died from fright and exhaustion, a giant spectral hound stood over Baskerville’s body and tore out his throat before disappearing into the night. 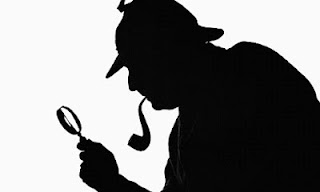 Now, the curse seems to have reared its head again. Sir Charles Baskerville has apparently died of a heart attack, but his footprints reveal that he was running from something and his face is contorted in fear. Sir Charles had become afraid of the family curse before his death, and a giant paw print is found near his body. Fearing for the safety of his heir, Sir Henry Baskerville, family friend Dr James Mortimer heads to Baker Street to seek the help of Sherlock Holmes.


There follows a tale of murder, mystery, intrigue and late-night chases across the treacherous moors before the mystery of the hound is finally solved. I won’t spoil the story for those who haven’t read it, but I recommend that you do. Not only is it in my opinion Conan Doyle’s best work, it’s also a short novel that’s perfect for a quick read, and you can download it forfree!
Posted by Jacqui Griffiths at 11:04