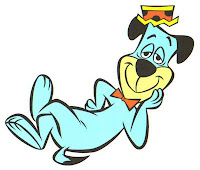 Huckleberry Hound is an old favourite of mine from the Hanna-Barbera kennel of cartoon dogs.


A blue dog sporting a straw boater and red bow-tie, Huckleberry Hound had a sleepy, southern-American drawl and a kindly personality. Wherever he went, would whistle and try to sing ‘Oh my darling Clementine’, turning to speak to his audience every now and again.


Huckleberry tried different jobs in each episode, but he often ran up against ‘baddies’ such as Powerful Pierre, Dinky Dalton and Crazy Coyote. After a number of setbacks, he tended to win through in the end. 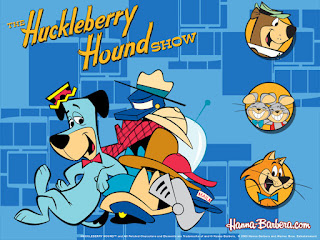 Huckleberry had his own show – The Huckleberry Hound Show – which began in 1958 and was the first animated series to be awarded an Emmy in 1961. It wasn’t all about the hound though. Each programme included three cartoon episodes: one starring Huckleberry Hound, one featuring Yogi Bear and Boo Boo, and a third one with the mice Pixie and Dixie and their arch enemy, Mr Jinks the cat. The series had long-lasting appeal, and I remember watching it on Saturday mornings in the 1970s.


In the end, Yogi Bear was more popular than Huckleberry and he was given his own show in 1961. Huckleberry appeared with Yogi in some subsequent cartoons, and Yogi was replaced by Hokey Wolf in The Huckleberry Hound Show. It was never the same after that, but the memory of Huck's glory days lives on.

Here are some links to a couple of Huckleberry Hound cartoons: Sheriff Huckleberry and Sheep-Shape-Sheepherder. I hope you enjoy them as much as I did.

Posted by Jacqui Griffiths at 17:39