Horrified at Halifax, Livid with Lloyds

There's no denying that it's a fairly furious HoundHead writing this post - and it's all the fault of callous bankers. 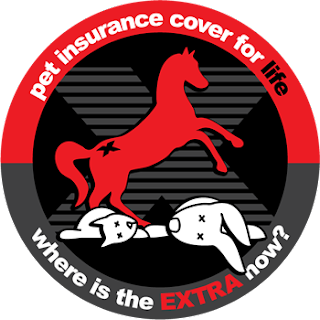 I've always insured my dogs, and I've told anyone who'll listen how important it is to have a good cover-for-life policy that will help meet the costs of treating any long-term conditions. Over the past two years my dogs have needed more than £7,000 worth of veterinary treatment –Charlie was paralysed before he had major spinal surgery in 2010, while Fargo needed a cruciate ligament operation last July, not to mention Billy’s bite wound and both Charlie and Fargo's ongoing physiotherapy.


In every case, I was incredibly glad that the dogs were insured. I’d do anything for my dogs, but the truth is that I just might not be able to find that sort of money myself. Having cover-for-life insurance took a huge amount of stress out of these anxious times.


It’s not easy to swap and change when it comes to pet insurance. Any condition that’s already been diagnosed at the start of your policy won’t be covered by a new insurer. So you need to do your research and get it right first time.


That’s what many responsible pet owners did, choosing Lloyds or Halifax as their insurance provider. A sturdy choice, you might think, as both are established, big-name banks. So you wouldn’t expect them to simply pull out of the market and withdraw the cover-for-life pet insurance policies from under their customers’ feet, would you?


Well, that’s exactly what they’ve done, leaving people who did the right thing – who took the care to insure their pets against long-term conditions with a 'reputable' insurance provider – high and dry. Anyone who’s made a claim on their policy won’t be able to cover the same condition with another insurer. The only choice they have is to find the money for their pets’ treatment, or not to treat the pet.


Of course, it’s the banks’ prerogative to pull out of certain markets if they’re not profitable – but Lloyds and Halifax know they’re leaving their pet insurance customers with no other options, and they should honour the cover-for-life agreements they already have in place with customers.


Quite simply, Lloyds and Halifax are showing an outrageously callous attitude which, to my mind, constitutes an abominable breach of trust. And it’s not only trust in Lloyds and Halifax that will suffer. If such large, apparently dependable financial companies can leave customers high and dry like this, what’s to stop anyone else doing it? Who’s going to have this vital safety net pulled from under their paws next?


The good news is that pet owners are not going to take this lying down. Dogs Today editor Beverley Cuddy has already started marshalling the forces and encouraging people to write to the banks to voice their concern. Animal welfare charities and public figures are lending their voices to the cause, and pet owners are closing down their Lloyds and Halifax bank accounts. I hope it’s not long before these banks start to feel it in their balance sheets.

Please join the campaign and get your voice heard. Beverley’s written a very informative Coldwetnose blog on the campaign, and set up a Hound Out Halifax and Lloyds Facebook page. Your support could make all the difference.

*Picture courtesy of Coldwetnose.
Posted by Jacqui Griffiths at 16:57