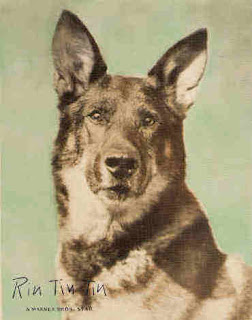 In terms of fictional dogs, Rin Tin Tin is a bit of a cross-over. He was a real dog who starred in many films, often playing a wolf or a wolf hybrid although he was actually a German Shepherd Dog. It may seem hard to believe now, but he's credited with saving the Warner Brothers film studio from bankruptcy.


The original Rin Tin Tin (also known as Rinty) was rescued, along with his sister Nanette, by American serviceman Lee Duncan who found the pups in a bombed-out dog kennel in Lorraine, France on 15 September 1918. The puppies were born on 10 September 1918, and were only days old when Duncan found them. He named his pups after Rintintin and Nénette, the 1-inch-tall woollen puppets that were given to the American soldiers as good luck charms by the French. He trained them to perform like the German war dogs he’d seen, and even visited a prison camp to learn more about the dogs from the German kennel master who had been in charge of the bombed kennel. 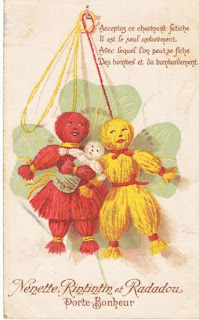 Duncan took his pups on a 15-day sea journey back with him to the US after the war ended. Unfortunately, Nanette became ill with canine distemper during the journey. Duncan put her under the care of a renowned German Shepherd breeder when he arrived in New York, but she died soon afterwards. So Duncan headed to California with Rin Tin Tin. In 1922, a friend of Duncan’s filmed Rinty leaping 11 feet at a dog show, and Duncan decided that the dog had the potential to be a movie star.


Over the next few months, Duncan was turned down by nearly every studio in Hollywood, but eventually he came across a film crew trying unsuccessfully to shoot a scene with a wolf. After much persistence, they tried the scene with Rinty and shot it in one take.


Public reaction to Rinty was phenomenal and he is credited with saving the film company, Warner Brothers, from bankruptcy. He went on to make 26 films for the studio, often playing a wolf or a wolf hybrid. You can see him in action in the 1927 silent film, The Hills of Kentucky.


Rin Tin Tin died on 10 august 1932 and his body was later moved to the Cimetiere des Chiens in Paris, since France was the land of his birth. Legend has it that he died in the arms of film star Jean Harlow on Duncan’s front lawn.


His career didn’t end there though. Duncan continued to breed and train dogs from the Rin Tin Tin line. Subsequent generations starred in movies until 1947 and in a children’s TV series, The Adventures of Rin Tin Tin, which ran from 1954 to 1959.


Rin Tin Tin has truly become the stuff of legend, a hero of fictional stories as well as a dog in the real world. Among his more recent fictional appearances he made a brief appearance in The Simpsons, and the first part of his life is brilliantly fictionalised in Glen David Gold’s wonderful novel, Sunnyside.
Posted by Jacqui Griffiths at 12:14