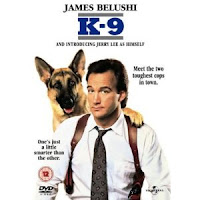 In the miss-matched, odd-couple world of the buddy cop movie you need a clash of characters, a reluctance to work together, a certain animosity between partners that is gradually transformed into huge respect, deep friendship and even love. And what better way to achieve this than by pairing your detective with a dog?


That’s what the makers of 1989 cop comedy K-9 did when they cast James Belushi opposite a German Shepherd Dog.


Belushi plays San Diego narcotics detective Mike Dooley, whose pursuit of drug baron Ken Lyman has led to attempts on his life. Dooley is given a police dog named Jerry Lee, which is trained as a drug-sniffer, to help protect him. Dooley has never worked with a dog before, and the beautiful Jerry Lee is both intelligent and independent. So of course, he and Dooley start out hating each other, with Jerry Lee proving a destructive, interfering pain in Dooley’s backside.


It’s a fairly standard formula for a cop comedy, and the film was released to mixed reviews. But for me, the strength of the two leading actors – Belushi and the dog – makes K-9 a very special film. Belushi’s comic timing is perfect, and Jerry Lee has an expressive star quality that matches his co-star’s abilities. There’s a real chemistry between the pair that’s expressed in words by Dooley, and in expressions by Jerry Lee.

While the film credited Jerry Lee as playing ‘himself’, it seems that this wasn’t the real name of the canine actor. The web offers conflicting accounts of who he really was, with one source saying he was flown in from Germany. However, most accounts agree that Jerry Lee was played by a real police dog named Koton, who sadly was later shot dead during a real-life drug bust.


I can’t tell you much more because I don’t want to spoil the film for you. But watch this clip from K-9 to see some of the tussling between the two characters.


Next time: another famous German Shepherd Dog.
Posted by Jacqui Griffiths at 13:41