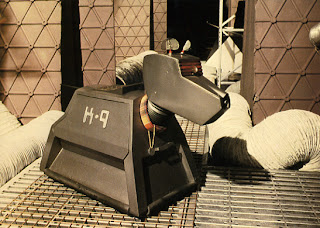 As a child in the late 1970s, already with a long-standing obsession with dogs, my interest in the canine world spread far and wide. The makers of Dr Who seemed to understand this, and tailored the programme according to my tastes by introducing a robotic dog called K-9.


K-9 first appeared in 1977. It was the year of punk (which went right over my sheltered, nine-year-old head although many punk bands would later find their way into my list of favourites), the Queen’s Silver Jubilee (at a street party a giant, bedraggled Womble tried to convince me that he wasn’t a man in a suit), and the first Star Wars film (which blew my tiny mind). The time was ripe to mix it up a bit in the world of Dr Who, eccentrically portrayed at the time by the excellent Tom Baker. 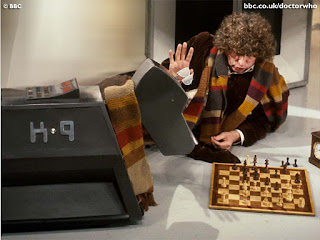 K-9 had something for everyone. For robot lovers, he was a robot and for dog-lovers, he was a dog – a talking dog at that, what more could you want? For long-suffering parents like my dad, who didn’t really want a dog in the house but had been cajoled into allowing one, K-9 represented the clean, clever and useful ideal that a real dog just didn’t seem able to live up to.


You can see K-9 in action on YouTube, including a brilliant clip of him playing chess with the Doctor, which shows how dog-like he could be despite his massive computer brain (sorry about the ad at the start).


Another of K-9’s strengths was that he could be upgraded with new capabilities. So he went through several incarnations. The first model accompanied the Doctor from 1977 to 1978 before deciding to stay behind on the Doctor’s home planet, along with the Doctor’s travelling companion. But even as children across the land began choking back their sobs at this sad goodbye, hope was reborn when the Doctor unpacked a box labelled ‘K-9 Mk II’ at the end of the episode.


The second K-9 was souped-up with an ability to predict danger, a handy warning mechanism for time lords in perilous situations. However, after being severely damaged in 1981, K-9 was only able to function in a parallel universe, so he was left behind along with another of the Doctor’s assistants.


That seemed to be the end of K-9’s Dr Who career, although both the first and second versions were later to appear in spin-off series. In fact, a third K-9 model appeared in his own series before showing his face in Dr Who at all. As my interest in Dr Who didn’t match my interest in dogs, I’d drifted off from the series by this time, so it’s no surprise to me that I have no memory of K-9 Mark III, apart from a hazy recollection of his self-sacrifice at the end of the revived Dr Who some six or seven years ago. I didn’t realise that he was then rebuilt by the Doctor and, yet again, given to his assistant, at the end of the episode. 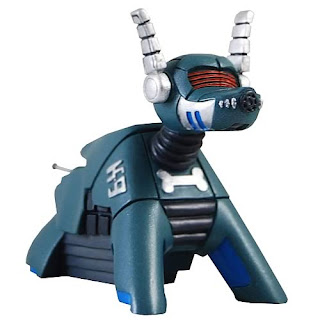 From his appearances in spin-off The Sarah Jane Adventures, the fourth K-9 has gained the ability to hover and teleport, but he’s sadly missed from the actual Dr Who series. Apparently the original K-9 regenerates to gain laser weapons and the ability to fly in the latest spin-off series, K-9. I haven’t seen that though, as my reminiscent heart still belongs to the original model.

Another K-9 appeared in one of my favourite films of the 1980s. Read about him here next week.
Posted by Jacqui Griffiths at 11:39