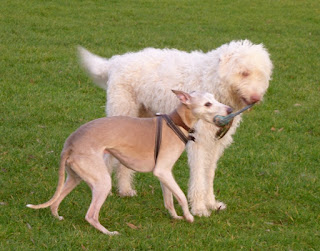 Look at the photo on the left: it was taken on a warm day in January this year. Now scroll to the picture below. That was taken eight years ago when Charlie Whippet was five years old and Fargo was 11 months. Notice the similarity? It makes me so happy. After the trials of the past few years, it's a joy to see them playing like this again.

A couple of weeks ago, Fargo went to the vets for his six-month check-up. The sudden cold snap a few weeks ago had made his leg feel a little stiff, but the physio felt that this was more to do with the suddenness of the temperature drop and that he’d have coped better with a more gradual chilling out. Then the temperature plummeted for a second time, complete with snow, but this time I really felt that Fargo coped well with the colder weather. I do take things a bit easier on him when the temperature drops, but he seems to have got through the latest mini-ice-age OK.


I was overjoyed to hear that the vet agrees with me. Six months after his knee operation, Fargo’s leg muscles are looking good and he’s walking well. Unless anything goes wrong, I now only need to phone the vet every six weeks or so with updates on Fargo’s progress. And there is still a little progress to be made because, at last, we’re starting to reduce Fargo’s medication!


Fargo will always have some arthritis in his knee now and he might have to go back on the Metacam next winter, but we shall see. And in the meantime, I hope a slow, steady reduction in medication will coincide with a gradual rise in temperatures. 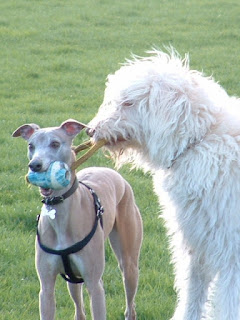 Charlie will be staying on his medication though. The cold weather isn’t friendly to his 13-year-old bones and it’s been making him a little bit stiff and sore. The Metacam helps him, as does the judicious applicaton of a heat pack if he's a bit sore.

Having said that, Charlie’s clearly been feeling very well in himself and he’s more playful than he has been for a couple of years - in fact, since his spinal surgery in June 2010. He might not be as steady on his pins as he used to be, but he's definitely happy and confident, and as long as he's warm there’s no stopping him.

The two pictures in this post make me so happy because, due to their various health issues, I haven't seen these two play like that in ages! Of course they do a lot less running now, but they still know how to enjoy themselves.

It's a good start to the year, and now we’re all looking forward to some warmer weather,so the dogs can enjoy the holiday we have planned for the spring.

Insurance made this possible
It's taken a lot of hard work to get Charlie and Fargo on their feet again, and it wouldn't have been possible if they weren't covered by good, cover-for-life insurance policies. Their treatments have cost thousands of pounds, and ongoing physiotherapy is making all the difference. While we're doing everything to prevent it, there's still a risk that Fargo's other cruciate ligament will rupture and he'll need more expensive surgery. I don't know what I'd do if my pet insurance was taken away from me now, but I know some people are already living with that nightmare and there could be more to come.

So I hope you'll support the Hound Out Halifax and Lloyds campaign on Facebook to try to pressure these banks into doing right by the pet owners they've left in the lurch.
Posted by Jacqui Griffiths at 14:55