You may have noticed that my recent posts have mentioned four dogs, instead of the more customary three. Well... 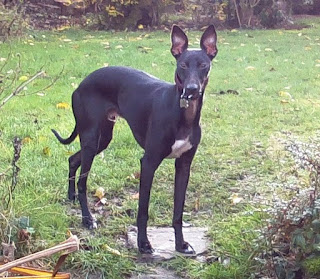 Meet Stanley, who has made it a hectic and exciting couple of months here at HoundHead Towers. Stan is an 18-month-old black whippet with a white chest, and he even has a built-in magic wand by virtue of one white toe on his left front paw. He likes to keep his ears up, and he can curl up really small like a cat. Here's the story of how Stanley came to live with us.


As a follower of the wonderful Scruples Whippet Rescue, it came to my attention late last November that there was a Whippet in Leicester looking for a foster home. For those who are unfamiliar with the world of dog rescue, many charities, like Scruples, don’t have their own dogs’ home. They rely on foster carers across the country to give a temporary home to the dogs, looking after them and assessing their behaviour and needs so they can then be rehomed permanently. Well, I know my whippets, I’m in the area and I’m generally at home all day, so I volunteered. 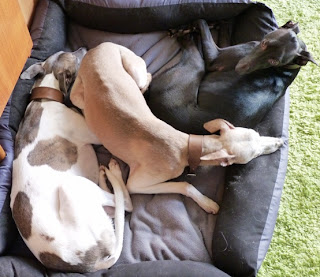 Stanley was being bullied by an older dog at home, and this was causing some stress-related behavioural problems including peeing on the kitchen floor, barking at night, not eating his food when the other dog was in sight, and chewing the furniture. In addition, his owner told me he was only put on a lead when it was absolutely necessary, and he hated it. Stanley was very much loved but his owners’ work commitments had changed and they were finding it hard to give him the time and attention he needed. So they made the difficult – but responsible – decision to rehome him.


I collected Stanley on a Sunday morning at the end of November. He was called Shadow at the time, but I thought that was a bit dark and depressing for him (although, being black and silent, he can easily disappear into any shadow, rather like a Whippet Ninja). Anyway, I tried out a few names on him in the car on the way home and he chose Stanley. He’s answered to that name ever since, as if it always was his proper name. 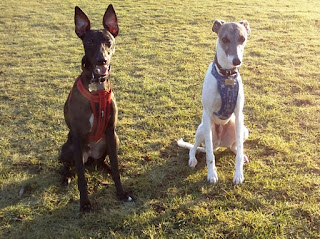 Stanley was definitely an anxious fellow, which is understandable given that he was being taken away from his home. He was incredibly bouncy and licky, and when he got to my house he jumped all over my dogs, which didn’t necessarily impress them. However, we took them all to the park and they ran around together nicely off the lead. Stanley refused to eat his evening meal and had a tendency to bark at all the noises in our neighbourhood, which were all strange to him. He spent a lot of the night pacing up and down, but did eventually settle down. It wasn’t a bad start but there were obviously some issues to address. 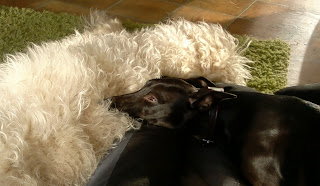 Since then Stanley has really settled in. He hasn’t chewed any furniture and he doesn’t wee in the house – all that was to do with the stress he felt at his old house. He gets a good run off the lead with Billy Whippet every morning and a walk in the evening. I threw away his old collar, which was hard and cracked on the inside and rubbing his throat, and put a harness on him. It turns out he walks very nicely on the lead after all. 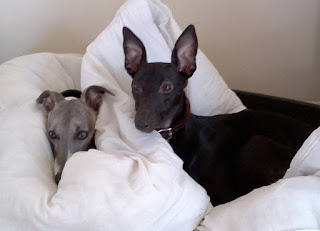 Now Stanley's much calmer and, after a week or so of encouragement and monitoring, he became happy to eat his meals alongside the other dogs. He did have some separation anxiety at first – he would bark and whine a bit and was not easy to settle down – but we did some work on that and he’s much better now. He didn’t know about the special relationship between Whippets and quilts, but he soon got the idea and now he spends his evenings snoozing under a quilt on the settee. He’s become great friends with Charlie, Fargo and especially Billy (they’re the closest in age and Billy can run more than the other two), and he’s very affectionate with us humans too. He quickly attached himself to me so well that, even after two weeks, people on the park thought I’d had him since he was a puppy. 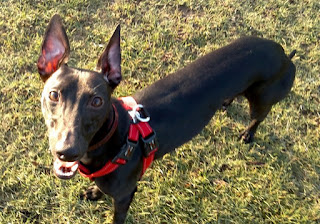 In fact, Stanley quickly got his feet well and truly under the table here. He’s a joy to have around and he settled in so seamlessly with my gang that I had to offer him a forever home. Less than seven weeks after he came to stay with us, I signed the contract to adopt him. It's an epic fail on the fostering front, but a win for both me and Stan. Now I’m really enjoying sharing my life with four wonderful dogs - although four is definitely enough to be going on with!
Posted by Jacqui Griffiths at 11:03