Every now and again, for no apparent reason, bones appear in my garden. Once, I even found an entire chicken wing, feathers and all, outside my back door. The bones are often cooked and, to my dismay, they’re sometimes already being crunched up in the mouth of a Whippet before I discover them. I think some of them are left by a fox, but today I discovered another source for the mystery bones. 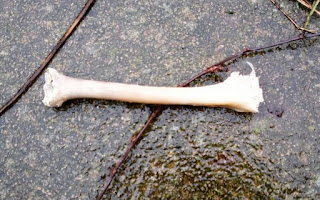 Then this morning, as I was quietly getting on with some work and paying little attention to the rain outside my window, I was startled by a sudden clattering on the roof. For a second, I thought it might be a pair of pigeons chasing each other about up there, as they like to do sometimes. But a moment later I watched as a bone of significant size came tumbling over the eaves to land just outside the window!


‘This must be the work of crows,’ I thought as I ventured outside to investigate. The bone was too big to be from a chicken and I think it might have been a lamb bone (being a vegetarian, I’m not terribly familiar with different types of bone). The cartilage had been nibbled off at both ends before the bone was dropped.


I like crows. When I brush Fargo the Labradoodle, I often leave some of his woolly hair out in the garden and watch them gather it up for their nests. So maybe the crows think they’re giving something back by sending him a bone or two (although the Whippets will generally get there first). They are very intelligent birds, although perhaps they don’t realise that cooked bones can splinter and dogs shouldn’t eat them.


Anyway, I left the bone there for a couple of minutes in case anyone came to claim it, but they didn’t, and as I couldn’t leave it for the dogs to get hold of I threw it away. Shortly afterwards a whole flock (or ‘murder’) of crows descended on the garden, as if they were looking for their lost treasure.

And I was reminded of the amazing power of the canine nose when the dogs went out into the garden and, despite the rain, they knew exactly where the bone had landed! I gave them some dog treats to compensate for their missed feast.
Posted by Jacqui Griffiths at 12:43