Fictional dog of the week #3: The dog in 'The Outsider'

NOTE: This week's fictional is an old fella who isn't treated well. There are many non-fictional older dogs who are also in need of a loving home, so if you're thinking of adopting a dog, please consider an oldie. The Oldies Club is a great place to start your search.

A lot of people I’ve spoken to don’t remember there being a dog in Albert Camus’ novel TheOutsider (first published as L’Etranger in 1942). But for me, the brief episodes where the dog appears say a lot about humans, their sense of identity and their responses to otherness. So the apparent insignificance of this dog - and the fact that he is so easily forgotten by readers - is part of what makes the novel such a remarkable piece of writing.

The dog first appears when Mersault, the novel’s protagonist, bumps into his next-door neighbour, Salamano:


He had his dog with him. They’ve been together for eight years. The spaniel has got a skin disease – mange, I think – which makes almost all its hair fall out and covers it with brown blotches and scabs. After living with it for so long, the two of them alone together in one tiny room, Salamano has ended up looking like the dog. He’s got reddish scabs on his face and his hair is thin and yellow. And the dog has developed something of its master’s walk, all hunched up with its neck stretched forward and its nose sticking out. They look as if they belong to the same species and yet they hate each other. (Albert Camus, The Outsider. London: Penguin, 1983, p. 30-31) 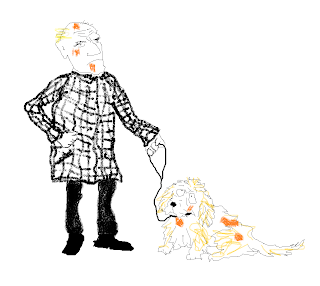 Like an unhappily married couple, Salamano and his dog seem to embody the idea that familiarity breeds contempt. Every day, taking the same twice-daily walk at the same times, old man beats the dog and swears at it. Mersault tells us:

When the dog wants to urinate, the old man won’t give it time and drags it on, so that the spaniel scatters a trail of little drops behind it. But if the dog ever does it in the room, then it gets beaten again. It’s been going on like that for eight years. Céleste always says, “It’s dreadful,” but in fact you can never tell. When I met him on the stairs, Salamano was busy swearing at his dog. He was saying, “Filthy, lousy animal!” and the dog was whimpering...  I asked him what the dog had done... Then, without turning round, he answered with a sort of suppressed fury, “He’s always there.” (The Outsider p. 31)

That statement, ‘He’s always there,’ has always intrigued me. The novel never attempts to represent the dog’s point of view, and despite the apparent similarities between the man and his dog, it’s clear that these are generated through human perception. And that opens up a certain gap between what we think we know about others – both human and canine – and what we know we can never know.


For me, in many ways, a dog is both ‘always here’ and ‘always there’. The ‘always here’ part comes through a human-canine interface that owes a lot to anthropomorphism on our part and to centuries of evolution alongside humans on the part of our dogs. But to some extent, dogs are also ‘always there’, being something other than human; something that we can never quantify or fully understand. And while a cat’s ‘otherness’ is often given the label of ‘independence’ and accepted without question, it can be a struggle to accept otherness in the dog, which is customarily described as ‘man’s best friend’ and ‘almost human’. It’s a source of endless fascination to me, something that gives me a delicious sense of instability that I think enriches my relationship with my dogs and makes it a continual learning experience. Not everybody sees it that way, but despite the grim picture that Camus paints of human-canine interaction, I think The Outsider shows a profound understanding of this dynamic.


As Mersault says, ‘you can never tell.’ Despite their apparent hatred of each other, the ‘here-ness’ of Salamano’s dog, and its importance to him, becomes clear after the dog goes missing:

Salamano... told me that his dog was definitely lost, because it wasn’t at the pound.... I told Salamano that he could get another dog, but he rightly pointed out to me that he’d got used to this one... He told me that he’d got it when his wife had died... He hadn’t been happy with his wife, but on the whole he’d got quite used to her. When she’d died he’d felt very lonely. So he’d asked a friend in the workshop for a dog and he’d got this one as a puppy. He’d had to feed it from a bottle. But since a dog doesn’t live as long as a man, they’d ended up growing old together.’ (The Outsider p. 46-47)

Salamano  seems to care very much for his dog, so why does he treat it so cruelly? I think that, like many people who are cruel to their loved ones, it's because he isn't happy. In the same way as he 'got used to' his wife, he's 'got used to' his dog, but in neither case has he worked to make anyone's life enjoyable. Instead, there is a strong sense of Salamano’s dependency on the dog for a sense of self that's deeply embedded in maintaining the status quo, no matter how unhappy that state is. And of course, in the end it's impossible to maintain it. The old man’s description of the dog holds up a mirror to his own personality and decline:

"He was bad-tempered,” Salamano said. “Every now and then we had a right old row. But he was a nice dog all the same.” I said he was a good breed and Salamano looked pleased. “Yes,” he added, “but you should have seen him before his illness. His coat was his best point.” Every night and every morning, after it got that skin trouble, Salamano used to rub it with ointment. But according to him, its real trouble was old age, and there’s no cure for old age. (The Outsider p. 47)

Salamano and his dog present a picture of anthropomorphism that is based on certain similarities – such as the simultaneous ageing of the man and his dog – but that ultimately comes unstuck when claims of similarity and familiarity can no longer be made. The tenderness and dependency that emerge alongside Salamano's cruelty to his dog are perhaps built on a false sense of unshakable truth; a certainty which is finally shaken by the dog's disappearance and the possibility that it was always at odds with Salamano's view of life. After all, it is possible that the dog isn't lost, but has found somewhere better to live and didn't want to come back. 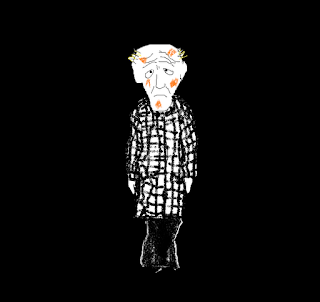 Salamano and his dog paint an unsettling picture of human relationships with ourselves and other humans, and with our dogs – a portrait that is all the more profound because of the brevity of the dog's appearance in The Outsider, his lack of a name and his ability to slip from readers' memories. When the dog disappears Salamano seems diminished, cut adrift from the certainties he used to take for granted and feeling a sense of dread at facing life without them that is evident in his words: ‘He smiled slightly and before he went, he said, “I hope the dogs don’t bark tonight. I always think it’s mine.”’ (The Outsider p. 48).

Next week's fictional dog also has no name - but which one is it?
Posted by Jacqui Griffiths at 10:41