Fictional dog of the week #2: Belle 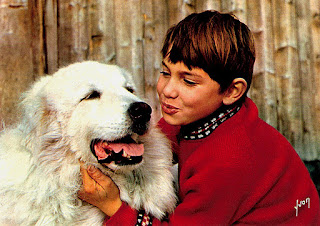 The star of 1960s children's TV series Belle and Sebastian, Belle is a Pyrenean Mountain Dog who is the best friend of Sebastian, a six-year-old boy who lives in a small mountain village in the French Alps.


The pair first turned up in a novel by Cécile Aubry, which was then adapted into a black-and-white, live-action TV series in France in 1965. That series was then dubbed into English and shown to kids like me, who fell in love with the giant snowball of a dog that was Belle.


Actually, my memory is a bit sketchy on this one. It was filmed before I was born and when I watched the black-and-white TV series and its colour sequel, these would already have been on their umpteenth rerun. This was in the early 1970s when I was a very young child, and although I remember being absolutely engrossed in the adventures, I can’t remember much about them. I had a feeling that Belle and Sebastian had run away from somewhere, but Wikipedia tells me that in fact, Sebastian lived with his adopted grandfather, sister and brother. My overriding memory is the snowy mountain landscapes and the gigantic, beautiful dog who was always there for Sebastian and helped him through thick and thin. To me, she was magical. 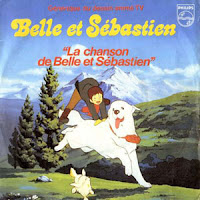 What I do know is that Belle was one of a handful of dogs who informed my impressionable young mind on the subject of dogs. Hence, my first (imaginary) dog was a big, shaggy, white, intelligent friend who walked everywhere with me, and who I could stroke without bending down – a mixture of Belle, Tintin’s Snowy and the Dulux dog with a little bit of Lassie thrown in.

There was also a Japanese anime version of the stories in the early 1980s which might be worth a look. And of course, the pair lent their name to the Scottish indie band Belle and Sebastian, so in a way, the legend lives on.


Next week’s fictional dog also comes from a French novel. Don't forget to check these pages to find out who it is.
Posted by Jacqui Griffiths at 12:19