Fictional dog of the week #1: Snowy

Welcome to a new series of articles introducing you to the many fictional dogs that have brightened up our lives. First up, my favourite fictional dog of all time, Snowy. 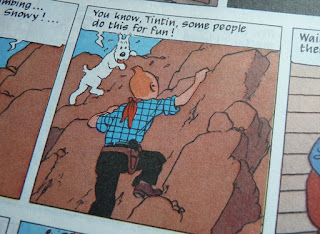 Among the heroes of the canine world, few stand taller than Snowy, intrepid Wire-Haired Fox Terrier and trusty sidekick to the boy reporter Tintin.


Although Snowy is a male dog, he was originally named Milou, the nickname of Hergé’s first girlfriend. He’s still called Milou in the French language version of Tintin’s adventures. And Snowy can talk, although he becomes less garrulous in the later adventures and some of his talking is a bit barky. 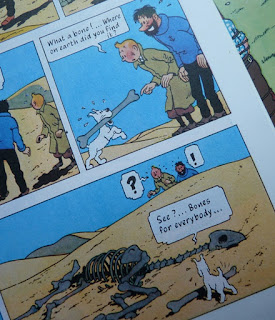 I’ve loved Snowy ever since I can remember. I love dogs because they’re dogs, but I also recognise that an element of anthropomorphism is a necessary part of the human-dog relationship, and to me, Snowy represents that relationship at its best. He’s a proper dog, obsessed with bones, food and the odd bit of mischief (usually to do with the theft of food or a sneaky drink of alcohol). But at the same time he manages to override his self-interest and come to the aid of Tintin when he’s needed. This he does in his own inimitable manner – for example, by peeing on the fuse of a bomb to put it out in several of the adventures.


Snowy is courageous and gets into plenty of scraps during his adventures with Tintin – he even fights a lion at one point, as well as confronting various crooks. But he also has his moments of cowardice, after which he berates himself for almost abandoning Tintin in his hour of need. And he doesn’t like spiders at all. 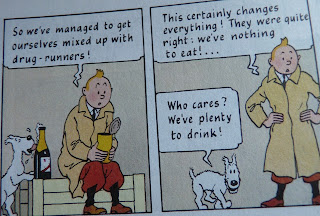 Wire-Haired Fox Terriers were immensely popular in the late 1920s and 1930s, when Hergé began producing the Tintin cartoon strips. They’re intelligent dogs that are courageous and full of character, and their looks combine these qualities combine with an undeniable cuteness. This could be why they appear in so many illustrations for posters, advertisements and children’s books throughout the 1920s, 30s and 40s. Hergé initially wrote Tintin’s adventures for a children’s newspaper section in his native Belgium, and the popularity of the Wire-Haired Fox Terrier as well as its character would have made it the ideal breed for Tintin’s trusty companion.

Next week's fictional dog is also associated with snow. Can you guess who it is?
Posted by Jacqui Griffiths at 17:37