Dog-leg diary: another one down, temporarily! 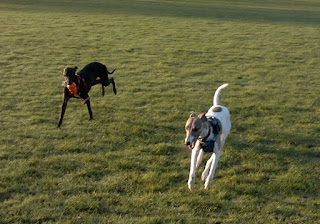 It’s been a while since I’ve written an update on the various dogs’ legs here at HoundHead Towers, and that’s because there really hasn’t been much to report. Fargo and Charlie are still going to hydrotherapy and they’re both making good progress. I take it easy on them in the cold weather as both of them have got some degree of arthritis now, but during the warmer spells I can see how happy and well they feel. Fargo is allowed off-lead for 20 minutes during his walks now, so he can pick up his pace a bit as long as he doesn’t run around like a lunatic. Of course, ‘lunatic’ is his favourite mode, but he’s been pretty good at listening to the voice of moderation.


So far, so good. We’re even getting to the stage when all four dogs (yes, four – more on that later) can look forward to some longish walks together.


But nothing’s ever that simple, and on Monday Billy the Whippet also fell victim to a leg-related injury. He was running on the park with some lovely Pyrenean Sheepdogs when one took a snap at him and left a big hole in his leg. I must stress that this wasn’t a vicious attack. I think the dog nipped at Billy as he was running, so the teeth of one and the momentum of the other combined to tear a hole at the top of his thigh; that bit at the front of his hip where there is very little flesh and mainly skin. 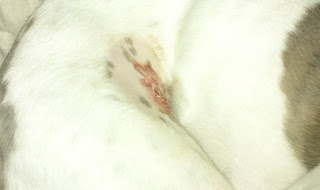 Because of the location of the injury, it hardly bled at all and, after limping for a second or two, Billy didn’t seem that worried about it. But it definitely needed stitches, so it was important to get him to the vet. Luckily I was with Tina, dog-mother to the dogs’ lovely chocolate Labrador friend Giddy. I don’t drive and the vets is a couple of miles away, but Tina very kindly dropped us off there on her way home. I owe her a big favour.


It turned out that Billy needed to stay in the vets for stitches – a fact that upset him far more than the injury itself, as he’s very nervous of the vet for no good reason I can see. The vet told me he’d try to do the stitches under sedation, but in the end Billy wouldn’t let him so he had to have a general anaesthetic. The bite had punctured both sides of Billy’s skin and pulled the skin away from his muscle, which meant that his body would fill the gap with fluid. So, a few hours and some £220 later, Billy came home with a couple of stitches on the outside of his leg while the wound on the inside was left open to drain. He’s got a supply of antibiotics and one of those Elizabethan collars to stop him biting the stitches, but he hasn’t needed to wear that yet and fingers crossed, we might just get away without it. 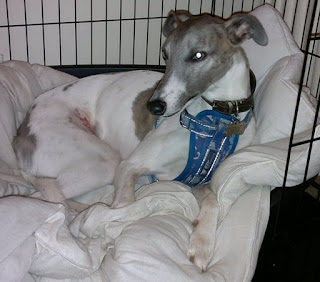 Having recovered from his ordeal at the vets, Billy feels very well indeed, so it’s a shame that he has to be rested for the next few days to make sure his wound doesn’t open up again. We’re off to the vets again for a check-up on Monday, and then for his stitches to be removed next Thursday. And I hope that will be an end to it.


I’ve decided to view Billy’s injury in a superstitious light. If bad luck comes in threes, then this is the third dog-leg problem we’ve had in the past three years: Charlie’s paralysis and spinal surgery in 2010, Fargo’s cruciate ligament operation in 2011, and now Billy’s puncture wound in 2012. If that’s the case, we can all look forward to a lovely spring and summer full of nice walks with healthy dogs.


Seriously, while these dog-leg issues do represent a run of bad luck, things could have been a lot worse if the dogs hadn’t been insured. I simply don’t have the kind of money that I’ve been spending on vet fees over the past few years. So I’d like to say this to all my readers: please make sure that your dog is insured, preferably with a cover-for-life policy. You never know what might happen and how much it will cost to treat.
Posted by Jacqui Griffiths at 15:20