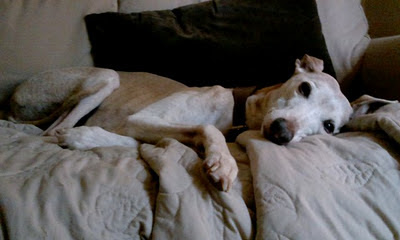 My lovely Charlie the Whippet is 13 years old today. He's a very special dog so I've dug out some photos to tell you a bit about him.


Charlie came from a very nice lady in Newark, who I contacted after Zephyr, my previous Whippet, had died. She was a responsible breeder who gave me a proper (though kindly) grilling to make sure I was a suitable whippet owner. After that we had a bit of a wait before a litter of puppies arrived. By the time they did, I’d moved to Reading to do my PhD and I brought Charlie home by train from Newark at the end of December 1998. He coped very well with the journey and got lots of admiring looks on the Tube. 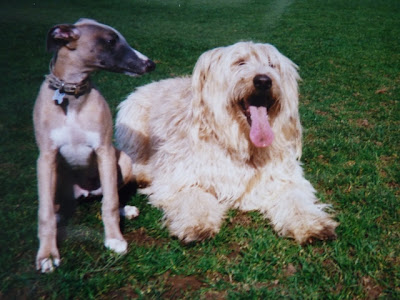 Charlie's other name is Silkstone True North, but I called him Charlie because when he was chewing a toy, his facial expressions reminded me of Charlie Chaplin. When Charlie was young he had a dark blue face and white paws. Here he is at three months old with my Irish Wolfhound crossbreed, Murphy. Charlie thought Murphy was the best thing he’d ever seen. When he wasn’t play-fighting with him, he was sleeping on him (Murphy was like a big soft rug). Murphy was very patient about it all.


Charlie was the greediest puppy in his litter and he was a chunky pup, full of mischief and quite difficult to train in recall. We had a few hairy moments, such as him running into the road and standing in front of a bus – I swear he was laughing at me too – but we got there in the end when Murphy and I taught him that retrieving a Kong so it could be thrown again was one of the most important things in life. As Charlie grew up he became much more reliable, and since then I’ve always taken my dogs to puppy training classes so we can get the basics in place among other dogs in a secure environment. 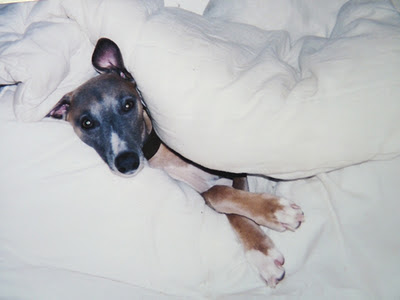 When he was younger, Charlie liked to run until he dropped. But one of his key skills has always been chilling out. It’s a quality I’ve always admired in him and I’ve tried to learn from it. I kept this photo on my desk when I had a stressful job and it helped to remind me that Whippets know what's important in life.


Charlie’s blue face turned a distinguished grey when he was a couple of years old. I think that like people, some dogs go grey early on while others don’t. A lot of people think Charlie is much younger than he is because they never knew him with his blue face. He’s also lost his white socks as the hair on his fawn legs has turned white. Most people don’t know about the socks, either. 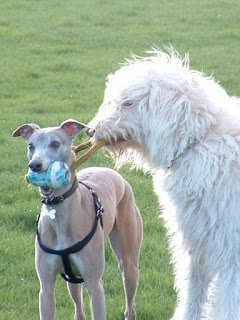 When Murphy died in 2003, I let Charlie say goodbye to him. He sniffed Murphy's body before embracing life as an only dog. He did miss Murphy, but he didn’t seem to mind being the only dog apart from the fact that he hated being left alone with no canine company. In the end, it was only a few months before Fargo joined us. You wouldn't believe from looking at him now, but Fargo was a very small puppy. He loved Charlie as soon as he saw him, but Charlie really couldn’t be bothered with Fargo for a couple of weeks because he didn’t think he was big enough to play with. That soon changed though and they became very firm friends.


I took Charlie to agility classes for a while and he really enjoyed them. He still enjoys jumping over logs and stuff when we’re out for a walk. All the trainers at the class said it was amazing how much he kept eye contact with me. He’s like that. He likes to pretend he’s really independent but actually he wants me to be nearby. He likes us to work as a team. 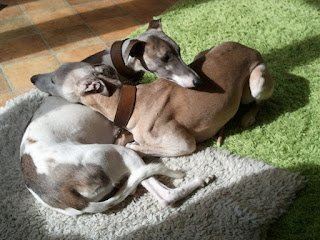 We pottered along happily for a long time, going on holidays to Wales and stuff like that. When we moved to a bigger house we were joined by Billy the Whippet, who was 13 weeks old. Charlie pretends that he can just about tolerate Billy, but they love each other really. They enjoy wrestling each other and you’ll often find them curled up together too. 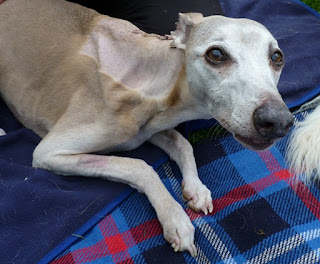 Then in summer 2010 – disaster! Charlie lost the use of all his legs due to a compressed spinal cord and ruptured disc. He had the tops taken off some vertebrae in his neck and had to learn to walk again. He didn’t like his stay in the vet hospital and he went on hunger strike. He lost a lot of weight and looked really ill. It took weeks to get him standing up again, but gradually we got him walking even though he had a weak left foreleg which he dragged on the ground a bit. 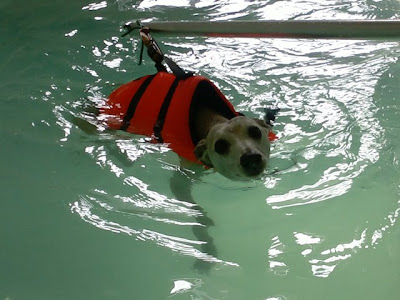 Now, though, Charlie is transformed. Fargo had a cruciate ligament operation this summer and had to go to physiotherapy and hydrotherapy. I mentioned Charlie and the physiotherapist suggested I brought him along. It turns out that he’d been compensating with his strong legs and letting his weak legs get even weaker. 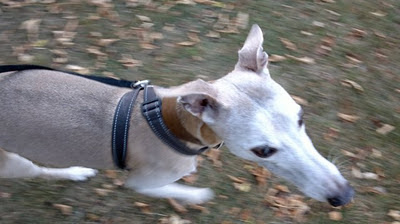 After Charlie's very first swim in the hydrotherapy pool he was like a different dog and now, a couple of months later, he’s much stronger. He picks up his left foreleg nicely and he really enjoys his walks. I get really excited when I see him walking so well and he’s more confident too. He even starts games with other dogs on the park! He can get a bit stiff and we think he might have some arthritis in his lower back, but he's healthy, happy and enthusiastic (especially about treats). He leaves most of the running to Billy now, but he has been known to break into a sprint, especially when he sees one of his friends on the park. That's another reason that people think he’s much younger than he is. 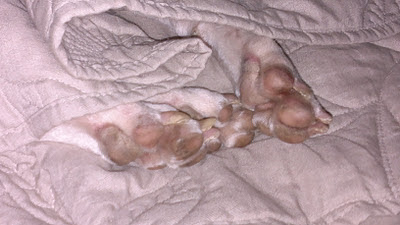 Today, Charlie will have a swim in the hydrotherapy pool before spending the rest of his birthday chilling out at home. He’ll get lots of treats and then, as it’s Firework Night, we’ll settle down to watch a film. He probably won’t see the film as he’s never been interested in TV and anyway and he’ll be curled up under a blanket on the settee. But it will help to make sure he doesn't get worried by any firework noises from outside. Whatever he does, I know he'll enjoy his birthday and I hope he'll have many happy returns.
Posted by Jacqui Griffiths at 11:14