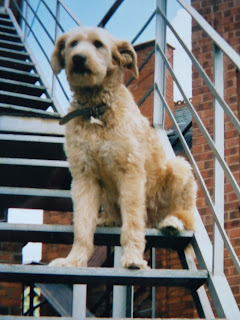 The 'last walk' theme of this year's Pedigree Adoption Drive brings to mind my first big dog, Murphy. Every day in the UK, some 20 stray and abandoned dogs take their last walk to be put to sleep because nobody wants them. Years ago, Murphy could easily have been one of those dogs.


Murphy was an indeterminate Irish Wolfhound crossbreed, very much like a large Labradoodle in looks and nature. I got Murphy from a friend who had ‘rescued’ him from a dogs’ home where he’d been staying because his previous owners had kept him chained up outside and obviously couldn’t cope with him. I suspect that he’d been an adorable fluffy puppy who quickly grew too big and boistrous for his owners. After seven days in the dogs’ home Murphy was due to be put to sleep, but my friend heard about him and took him on until he could find a suitable home for him. 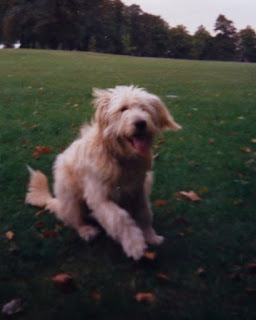 Murphy was around six months old when he came to live with me. He was already a large dog and although he was very friendly and eager to please, it soon became clear that he hadn’t had much positive training. He pulled hard on the lead, chewed the skirting boards and, when visitors came round, he’d pee himself while cringing at the prospect of a telling-off.


I must admit that in those first few days I had some doubts about whether I could handle Murphy, but he was a very intelligent dog and quick to learn. He just needed to know what was expected of him, to be told a firm but friendly manner and to know that nobody was going to hit him. He got on really well with my other dog Zephyr, a Whippet who was choosy about the canine company he kept, and the three of us soon became inseparable. 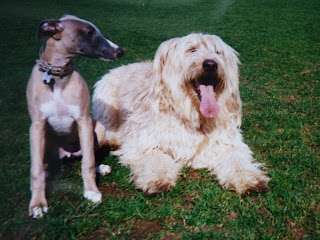 All Murphy needed was to be given a chance to be a good dog, and that is what he became. He was soon wonderfully well behaved in the house and, once I directed his boundless energy into games so he didn’t run off after every other dog he saw, a great companion to take for walks. Zephyr died at the age of 12, and when I got a new Whippet puppy (the lovely Charlie) some months later, Murphy was the most tolerant and understanding playmate he could have wished for. By this time he was about ten years old.

Murphy loved his walks and he loved meeting people. When I walked him on the university campus at Reading, overseas students used to ask to have their photo taken with him because they missed the dogs they’d left at home. Murphy was always happy to oblige. 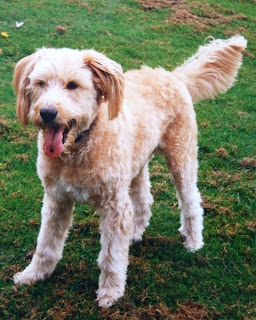 Later in life, Murphy developed arthritis and then Chronic Degenerative Radiculomyelopathy (CDRM). His walks became shorter but luckily his conditions didn’t advance far enough to stop him enjoying them and he always loved a game. He was such a good-natured dog who took everything in his stride, and he was on the best of terms with the vet.
So, some 13 years after he was due to be put to sleep at the dogs’ home, it was me who took Murphy for his last walk. He was about 14 years old then, and we’d only recently discovered that his kidneys were failing. I knew he didn’t have long, and on that last walk he let me know the time had come: ever keen for a ramble, this time he just wanted to go home. I slept on the floor with him that night and did my best to keep him comfortable. The next morning the vet came to the house. Murphy died peacefully, with his head on my lap.


Murphy was a great friend and he left a gigantic hole in my life. I know that anyone who had anything to do with him remembers him fondly. I'll never forget his sunny smile, his intelligence and his positive outlook. Eight years later I still miss Murphy, but I treasure the memories of those 13 years we had together. He gave me so much happiness and I'm so glad I was able to give him the long and happy life he deserved. I'm glad that, after years of brilliant walks together, he took his last walk with me. 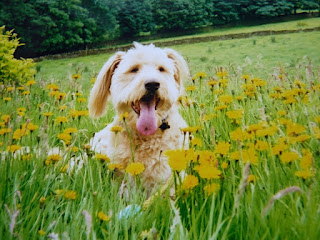 There are many other dogs who, like Murphy, deserve a chance to take their last walk after a long and happy life, not after a spell in the rehoming kennels. That's why the Pedigree Adoption Drive is so important to me. You can help by taking Ripley, the Pedigree Adoption Drive dog, on a virtual walk around the Web. Pedigree will donate £1 towards their target of £100,000 every time you do. Just click on the picture (left) of Murphy enjoying a game among the dandelions with his Kong, and off you go!

Posted by Jacqui Griffiths at 11:27