It was all going so well. Following his successful eight-week post-operative X-ray, Fargo was up to 25-minute walks as well as some other exercises. He was enjoying the fact that he was getting to see more of the park, albeit at a slow pace. Then he started limping again.


We think Fargo had probably tweaked his leg getting up or something. We had to be aware of the danger that he'd torn the cartilage in his knee, but it didn’t seem that way so we reduced his exercise and monitored the situation. So poor Fargs went back down to 10-minute walks pure and simple; no walking over poles or turning circles, just some more ice packs and then heat packs to make his knee feel better. 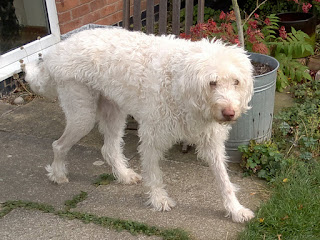 The good news is that it seems to have done the trick. Fargo's been to the physio a few times since the limping incident and his leg has steadily improved. Although the tweak has set him back a bit in his recovery, his walks have been extended first to 15 and then 20 minutes, and the poles and circles are back in. He’s been enjoying his weekly swim in the hydrotherapy pool and he seems perfectly happy on his operated leg now. Nice to see his fur growing back too! 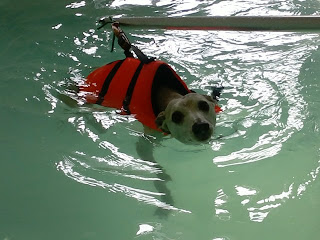 In the meantime, Charlie’s gone from strength to strength. He swam for five minutes last Saturday and he’s now on 30-minute walks as well as walking over poles and turning anti-clockwise circles to strengthen his left side. He did seem a bit stiff one day a couple of weeks ago and I’m keeping an eye on him to see if that recurs on damp days. If so, it could be arthritis – he is almost 13 years old, after all. Of course, we haven’t had many damp days just lately so I haven’t really had chance to observe anything in that context yet.
It’s great to see that both Charlie and Fargo seem to really enjoy their swims. My attention wandered for a second the other day and when I looked round, Fargo was already up the ramp and about to get in the water! I had to stop him getting in until he was allowed. I don’t think Charlie would get in the pool of his own accord, but he does seem to enjoy the swim and he feels great afterwards. I can see that, once Fargo’s been given the all-clear, I’ll have to watch him whenever we go near a body of water.
As for me, my morning routine now consists of an hour’s walk for Billy, followed by half an hour for Charlie, and then 20 minutes for Fargo. In the evenings I might take Billy out with each of the other two, rather than running him on the park. It certainly keeps me fit and I now have unsurpassed knowledge of the various 10-minute, 15-minute, 20-minute and 30-minute walks from my house. It’s pretty time-consuming, but it’s also great to give the dogs that individual attention. And since the weather’s been so fine I really can’t think of much that I’d rather be doing.
Posted by Jacqui Griffiths at 14:49