In the world of dog, treats are a valuable currency. My own three lads have been brought up on reward-based training and they’ll do anything for a tasty snack. With two mature fellas in my pack, I’m aware that their joints might need some added support, so we’ve recently been trying out Wagg Mobility Sticks, which are enriched with vitamins and minerals to help keep canine joints healthy. 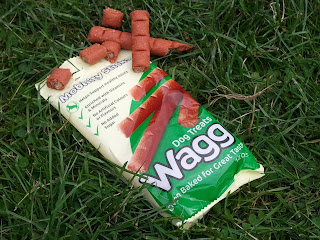 Regular HoundHead readers will know that I’m no stranger to joint problems in dogs. Charlie the Whippet is fast approaching his 13th birthday so I keep an eye on him for any signs of stiffness, especially since he had spinal surgery last year. Add Fargo the eight-year-old Labradoodle who’s just recovering from TPLO surgery after rupturing his cruciate ligament, and you can understand why I have a considerable interest in canine joint health.
Wagg Mobility Sticks are designed to be broken up easily, so you can use them as training treats or give your dog a bigger portion. They contain glucosamine and chondroitin to help support healthy joints – always a bonus where older dogs are concerned. The treats contain salmon and rice with no artificial colours, flavours or added sugar. And you get 120 grams of treats in a pack for about a quid. From my point of view, we were onto a winner with these.
Of course, the dogs don’t care about such details. It’s a fairly foregone conclusion that they’ll eat any treat, but they can surprise you with a sudden refusal. Underneath their general willingness to eat, they are actually connoisseurs and there are some ‘extra special’ treats that they’ll go crazy for. So what did they think of Wagg Mobility Sticks?
The first sign of success came when I opened the pack – as the unmistakable odour of salmon wafted out, Charlie’s ears pricked up and he swiftly manoeuvred himself across the room to land in his best-behaved ‘sit’ position at my feet, closely followed by Fargo and Billy the Whippet. As a healthy and active two-year-old, it could be argued that neither the exercises nor the treats were particularly at Billy, but try keeping him away.
I broke up the sticks to use as smaller treats – they’re described on the pack as ‘chunky’ and the reality didn’t let us down. The pieces were a good size for training and I think the chewy texture was well appreciated despite each piece being consumed in a split second.
In fact, all the dogs seemed suddenly keen as we ventured outside to do some treat-fuelled training exercises. Both Charlie and Fargo are seeing a physiotherapist at the moment, and they’re on restricted walks with some daily exercises to do, such as walking over poles to get them to stride properly. On the promise of these fishy treats, they were almost falling over themselves to walk over those poles and I had to add some heelwork to the exercise to bring some order to the proceedings. “No problem,” said the dogs, “Tell us what you want and we’ll do it – just give us the fishy treats!” 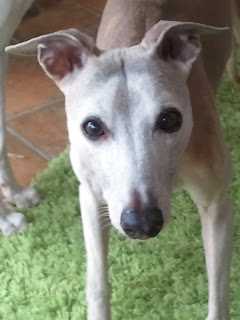 So, what’s the verdict? Based on taste and texture, Charlie, Fargo and Billy unanimously voted Wagg Mobility Sticks into the category of ‘extra special’ treats. Charlie gave me a look of pure horror as I put the bag away without emptying it into his mouth, and then spent some time willing me to give him just one more.
From a human point of view, the Wagg Mobility Sticks are an affordable way to treat the dogs. Every little helps, where their joints are concerned, so the glucosamine and chondroitin are welcome additions. Wagg also does a very reasonably priced range of complete dog food, including a senior diet that contains fish and fish oils as well as glucosamine and chondroin, and I’m now thinking of giving this a try.

* Especially with older dogs or those with mobility issues, it’s important to make sure they don’t put on too much weight as this can also harm their joints. It’s worth reducing the amount of food you feed at mealtimes to compensate for treats given during the day.
Posted by Jacqui Griffiths at 16:17