It’s been a while since I wrote an update about Fargo’s post-TPLO progress, and I’m glad to say he’s coming along well. He feels good and as the weather gets a little cooler he’s keen to run and jump about like a young-un. However, we are still in the early stages of recovery so it’s important that he doesn’t. Luckily, Fargo is very eager to please, so it’s fairly easy to divert his attention to other, less boisterous activities.﻿﻿


﻿Fargo had his four-week post-op check-up with the vet, who was very pleased with his progress, and next week he’ll be going in for his eight-week x-ray to make sure everything’s going OK inside his leg. In the meantime, we’ve seen some exciting developments. ﻿﻿ 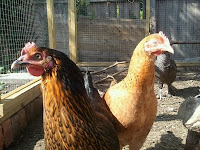 The addition of three lovely chickens to our family caused a little bit of barking at first. Billy Whippet still likes to rush at them now and again (they’re safely enclosed so he can’t get at them), and they’re a little wary of him although not too worried. Charlie Whippet, who’s an older gentleman, isn’t really bothered about the chickens, and they’re happy to ignore him. But if those chickens are warming to any animal, it’s Fargo. He likes to stand by their enclosure and they’ve started to approach him slowly and say hello. I swear they’re going to touch noses/beaks soon.
I’ve gradually increased the length of Fargo’s walks to 20 minutes. This means that instead of walking round the corner and back we can actually GO TO THE PARK!!! We only get to walk slowly around a couple of trees before coming home, but Fargo’s absolutely delighted. He loves to say hello to dogs and people, and we generally find someone on the park who’s willing to give him some attention.
Fargo also had his first taste of hydrotherapy last weekend. He’s a dog that loves baths but hates any other type of water immersion, but he did two minutes in the pool and I think he’s on the way to enjoying it. We’ll find out this weekend, when he goes in for four minutes. I’m keen to carry on with hydrotherapy, not only to help build up Fargo’s muscles, but also because, while he’s not allowed to run, it’s great exercise for him. We’ve also got some new exercises to do – walking over poles to encourage Fargo to lengthen his stride. We do this twice a day and it seems to be making a difference. Fargo likes it because it’s like a training exercise, which means he gets treats.
Charlie and Billy decided to come out in sympathy a couple of weeks ago, but only in a minor way. Charlie started limping on his left front leg and Billy injured the dew claw on his left front. He does some hard cornering when he’s chasing his toy on the park and he’d managed to tear it somehow. There was lots of blood but the injury itself wasn’t too bad, so after a couple of days rest (complete rest for Charlie, lead-walking only for Billy), they were back to normal.
Since his spinal surgery last year, Charlie’s front left leg has been weaker than the others, and his hind legs aren’t all they used to be. He came to the physio with us last weekend and we agreed to see if there’s anything we can do to strengthen his muscles. It could be a neurological issue, which would mean that his nerves aren’t communicating with his muscles well enough and there’s not much we can do about that. But it could be that Charlie’s lost some muscle tone by compensating for his weaker legs, and in that case we might be able to build up his strength a bit. Whatever happens, it’s worth a try.
Posted by Jacqui Griffiths at 13:05