Dog-leg diary: All cool in the pool

I feel that I’m truly becoming the queen of dog legs, with two of my three now receiving physio and hydrotherapy. Fargo’s session last week went well. He did three minutes in the pool but we kept his daily exercise routine the same until we’d had the results of his eight-week post-op X-ray. 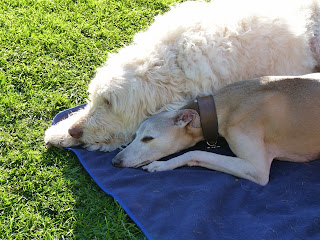 ﻿Early on Wednesday 7th, I dropped Fargo off at the vets for his X-ray. It was a tense time because, although Fargo seemed to be doing well, a lot depended on how his bone was healing. I’m glad to report that it’s healing well and I was delighted to be told that the X-rays looked ‘lovely’, which means we can start to build up Fargo’s exercises a bit more now. Fargo didn’t appreciate being left at the vet’s this time around and he howled when he woke up from his anaesthetic, but at least that’s over now.
While Fargo might have disliked his trip to the vet’s, he’s definitely started to enjoy his hydrotherapy sessions. He was really looking forward to his swim this morning and he worked really hard. I think he might have been swimming for five minutes; certainly no less than four. He seems much more at home in the pool now and his kicking has improved too. At first he tended to try to kick out with both hind legs at the same time, but now he’s alternating them well. His fur has also turned out to be an impressive feature, as it dries out very quickly despite him being so woolly. It draws admiring comments from the physio, who wished all his clients had coats like that.
I took Charlie along to the physio last week too, and was advised to cut him down to two ten-minute walks per day, with stretching exercises for his back legs and left foreleg. The physio thought Charlie had a sore back as the result of using some legs to compensate for others. He told me to apply ice packs to his lower back twice a day for three days, after which I should change to heat packs. Whippets and cold things don’t go together well, so Charlie didn’t appreciate the first few days of treatment. However, he does quite like the heat pack and it seems to be working – Charlie’s been picking his foot up more on his short walks, and according to the physio his hind leg muscles have already firmed up a bit and his back seems better.
So today, Charlie had his first taste of the hydrotherapy pool and I have to say he made me very proud. I had been worried that he’d panic, but he took to it very well and I think he might even have enjoyed it – he seemed to be on a bit of a high afterwards, anyway. Watching Charlie move in the water it became really clear how he uses one leg more than the other, but I think I can also see how swimming will improve this in time.
We’re back for another physio session next Saturday. Until then, Charlie and Fargo are following slightly extended exercise regimes:
Fargo
Charlie 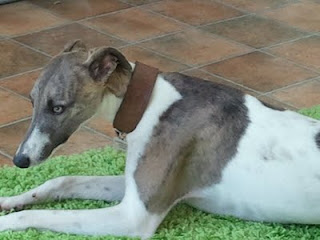 And what does Billy Whippet think of all this? Well he’s been coming along to the sessions because I can’t leave him all on his own at home. He’s stopped whining all the way through the session, but he still starts up when one of the dogs is out of sight (i.e. in the pool). He’s becoming calmer about it though and he accepted a treat from the physio today – something he’d never do if he was too nervous or upset. In many ways, I wish that Billy could go in for a swim too, as I really think he’d enjoy it. I wonder if there’s a recreational dog swimming pool anywhere nearby.
Posted by Jacqui Griffiths at 16:29