While many people around the country have seen enough snow to last them a lifetime, here in Leicester it’s only been intensely frosty over the past week or so. Until today that is, when we woke up to a blanket of the white stuff. Give me a couple of days and I’m sure I’ll be heartily sick of it, but today it’s still fresh and fun. The dogs love it and I love watching them playing and exploring in their new snowy world.
First off, there’s snow-wrestling, a good way to keep warm. Fargo and Billy wrestle all the time, in any weather, but like a lot of dogs they seem to feel extra playful in the snow. Charlie’s not so bothered about wrestling, although he does stay out in the garden for longer in this weather. At 12 years old and having recently recovered from a big operation, he likes to explore a bit and eat some snow before retreating under a quilt.
Then there’s snow camouflage. Both Fargo and Billy have quite good markings for this, as you can see from the pictures.
﻿﻿﻿
﻿﻿ ﻿﻿
Charlie is also a master of camouflage, but not in snow. The beach is more his colour and he blends seamlessly with any kind of path whether it’s sand or rock-based. So to warm you up after this series of snowy pictures, here's a photo of Billy and Charlie leaving the cold sea to chill out on the warm beach at Borth.
Have a merry Christmas and a very happy 2011!
Hound head x
﻿﻿﻿﻿﻿﻿﻿﻿
﻿﻿﻿﻿
Posted by Jacqui Griffiths at 14:23 No comments: 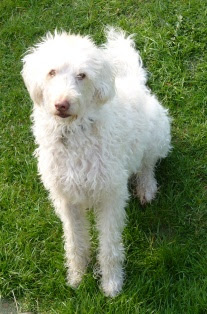 Woof! Fargo here.
I was dancing around in the snow the other week, pausing only to wrestle a whippet here and there, when I realised I had a doggy tune going round my head. It got me thinking about my favourite dog-related songs and how nice it would be to share them with you - especially now, when you're probably sick of hearing Christmas songs wherever you go.
It was really difficult to choose from all the doggy songs out there, so I asked Charlie and Billy for their whippety input and came up with our canine top 10. I hope you enjoy it.
Wishing you a waggy Christmas,
Fargs x
Fargo's favourites:
1. Whip it – Devo
Whippets are indeed good and of course, Charlie and Billy are biased.
2. Been caught stealing – Jane’s Addiction
Good barking at the beginning of this one, it gets Billy every time!
3. Golden Retriever – Super Furry Animals
Need I say more?
4. Atomic Dog – George Clinton
We Labradoodles love a bit of funk.
5. Dirty Little Shop – Dogs
A great band with a great name.
6. Hounds of Love – Futureheads or Kate Bush
The original Kate Bush version is brilliant, but ours is more of a Futureheads house.
7. Queen Bitch – David Bowie
You’ve gotta love the thin white duke
8. I wanna be adored – Stone Roses
If you squint your ears it sounds as if he’s singing ‘I wanna be a dog’ – and who wouldn’t?
9. I wanna be your dog – The Stooges
Well, of course!
10. The Irish Rover – The Pogues with The Dubliners
Rover is one of the best dog names.
Posted by Jacqui Griffiths at 15:44 No comments: 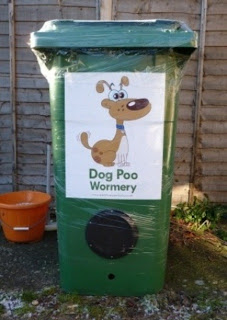 Maybe it isn’t the most pleasant of subjects, but as any dog owner will know, our furry friends can produce a lot of poo, and all of it goes to the landfill – a fact that is neither green nor pleasant.
So I’ve decided to usher in a new, greener era of dog poo disposal for my three by using a dog poo wormery. Put simply, the poo goes in, in biodegradable bags. The worms eat the poo and produce odourless casts, which you can then use to fertilise your garden (flowers, not vegetables!).
My new wormery has just been delivered (see the picture, still in its wrapping), so the next step is to set it up and establish the worms. Unfortunately I think it’s too cold to do this at the moment, so I’m going to wait until the garden’s thawed. But that’s OK because the worms didn’t come with the bin – the manufacturers know that people might not set it up straight away, so they send you the worms when you’re ready for them.
It’s a brilliant idea, as long as I can make it work. I’ll post on my progress, so if you’re thinking of getting a wormery but you’re not sure yet, check back in a couple of weeks to see how I’m getting on.
Posted by Jacqui Griffiths at 12:49 1 comment:

﻿ ﻿
I’m lucky enough to share my home with Fargo, a fifth-generation labradoodle. At seven years old he’s a beautiful, excitable boy who thinks everyone, human or canine, is his best friend. He’s eager to please though he finds it hard to sit still, he’s a bundle of laughs and he likes to curl up on the settee and watch films (he seems to like the Lord of the Rings trilogy, I’ve never worked out why).
Labradoodles have gained a name for themselves as ‘designer dogs’, and they remain a contentious issue. This was amply illustrated in Simon Hattenstone’s column, ‘Whose bright idea was that?’ in The Guardian on 13 November. Hattenstone interviews Wally Conron, who is credited with the invention of the labradoodle in Australia some 22 years ago in response to the needs of a blind woman whose husband was allergic to dogs. According to the article, Conron crossed a standard poodle, which doesn’t shed hair, with his best Labrador to create a crossbreed that would make a good guide dog without triggering an allergic reaction. Nobody would take the dogs because they didn’t want a crossbreed, so Conron gave it a name and said he’d invented a new breed. The labradoodle was born.
But as Conron tells Hattenstone, the market for this popular breed is built on myth. The name ‘labradoodle’ was a PR gimmick with the best of intentions, but now that the dogs have gained such popularity, it seems that often, their non-allergenic properties are a flimsy sales gimmick too.
Fargo’s often been admired by people who are sure of one thing when it comes to labradoodles – that they are non-shedding, non-allergenic dogs. In reality, this is true of only a small proportion of the dogs. They can have a variety of coat types – the non-shedding ‘wool’ of the poodle, the ‘hair’ of the Labrador or, like Fargo, a mixture of the two. But people will pay a lot of money for a non-allergenic dog, and it seems that some irresponsible breeders are doing nothing to dispel the myth that makes labradoodles – or any number of other poodle crosses – such a money-spinner.
What’s in a name?
Conron feels that with the name ‘labradoodle’ he created a monster. He condemns the ‘backyard breeders’ who will cross anything with a poodle because it will sell for a high price, and I share his concern. Over the past few years the classified ads in my local paper have included an increasing number of crossbreed puppies with portmanteau names – most of them (cockerpoo, yorkipoo, golden doodle, etc) poodle crosses.
Personally, I’ve got no problem with the term ‘crossbreed’, though I understand why people want to know a bit about their puppy’s parentage. My choice of the labradoodle was based on temperament and health, not non-allergenic properties. I got Fargo after my large shaggy crossbreed, Murphy, died at the age of 14. Murphy looked and acted like a very large labradoodle, but he was never designated as such because the notion was still new back then. After he died I wanted another big, shaggy dog that would have a similar temperament and a good chance of a long and healthy life. I wanted a crossbreed – but I wanted one that I could be fairly sure would grow up into the type of dog I wanted.
But it seems that creating a portmanteau breed name to suggest a ‘new breed’ is the pathway to riches for some breeders. And paradoxically, this means that the temperament, character and health of the dogs are often secondary concerns.
Good breeding
Fargo’s breeder never claimed that he’d be a non-allergenic, non-shedding dog. Like any responsible breeder, he vetted me as much as I vetted him. I visited Fargo with his parents when he was five weeks old and, when I took him home a few weeks later, I also received a ‘pedigree’ showing his family history. The breeder was very unhappy about the number of people who were making a fast buck out of indiscriminate Labrador-poodle crossbreeds. They put the dogs at risk, he said, by breeding from any dog and by failing to have the parents hip and elbow scored and eye tested, and they undermined the efforts of people like him to establish a standard for a healthy breed.
Reading Hattenstone’s article more than seven years later, I was struck by the way Conron’s comments echoed those of Fargo’s breeder.
Of course I’m biased, but I love labradoodles. They’re great dogs and I can’t share Conron’s regrets about the fact that they’re here. But it’s a tragedy that the short history of these wonderful dogs is already blighted by shallow gimmickry and the ‘designer dog’ label. Something needs to be done to discourage irresponsible breeders, and The Labradoodle Trust is doing good work in this area by providing a wealth of education and advice about the breed, as well as a rescue service.
Posted by Jacqui Griffiths at 12:51 No comments: